A Basic Bitch Tour of California 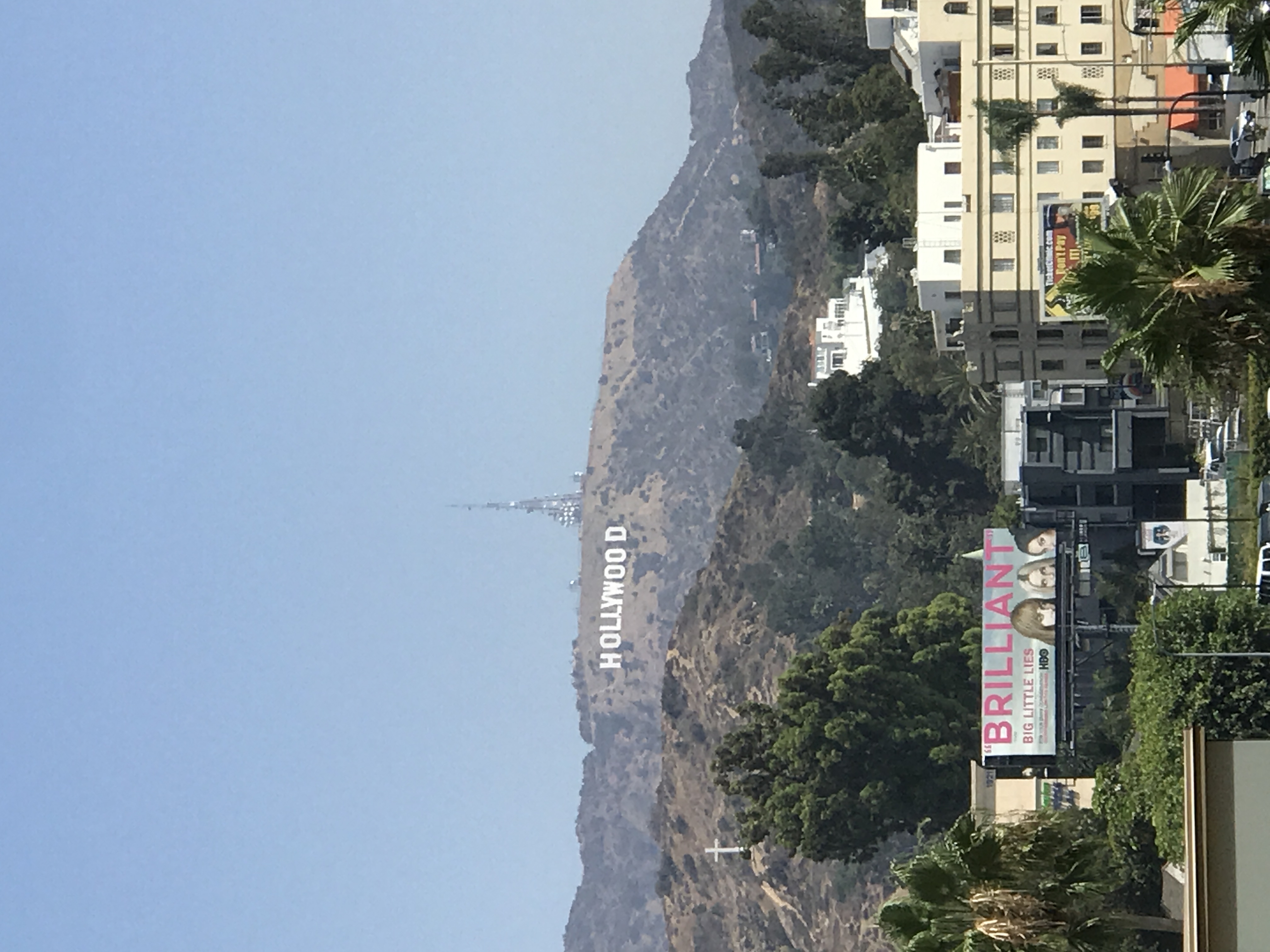 In the Summer of 2017, I was a ‘Barbie girl in a Barbie world’. Life in plastic is indeed fantastic if you get to go down the streets of Malibu in a convertible. That Summer I lived the great American Dream - at least my American Dream.

Since I was little, I have been a huge fan of cinema. Myy dad introduced me to the likes of Hitchcock and Tarantino when I started making sense of the world, just to have my ideas and perspective shattered by other’s stories. Film expands your horizons and makes you a more emphatic and open-minded person as they make it easier to put yourself in other people’s shoes. Movies have always ranked high on my scale of importance.

So, Los Angeles, the city of dreams, was built up in my mind as this enchanted place where moving pictures are created and where an array of stars descends from the sky every night to parade around the celebrity chef restaurants.

It was almost that…

When visiting the US it is hard to move away from commercial travelling as the market is America and most of what we find ‘commercial’ is ‘typically American’, whatever that means. Unashamedly, I’ll retell my story of the most basic (but awesome) trip of California someone can ever take.

Obviously, we first flew to San Francisco. Pier 39, the Ferry Building, Chinatown, Japan Town, sea lions by the bay, the house of Walt Disney, crossing the Golden Gate Bridge, riding the cable car, seeing the Painted Ladies, celebrating the Summer of Love, we did it all. We even had clam chowder at the Fisherman’s Wharf.

San Francisco has a great food scene, they pride themselves on how hipster and foodie they are with due reason. Speciality coffee can be found in every corner and you can’t help but feel cool in the city, unless you tell them you are a tourist touring California and are headed to Vegas and LA next - you will lose all your cool points. Instead, head to SF MOMA take in some contemporary art and ask a local where the hype food spot is at the moment. There is no point in me telling you where I ate, as the cool spot changes weekly and you don’t want to be sneered at when raving about a place that was cool three years ago.

I was in SF, I had visited the hidden Mexican restaurant garden, that I suppose no longer exists as Google has no idea of what I am talking about, I was feeling hip. I should have savoured it better, from here on my degree of coolness plummeted. It started on Napa Valley day trip, not because of the trip itself, the vineyards are beautiful, but because I was 18. Being well old enough to drink in Portugal and as a good Portuguese, an appreciator of wine, my heart sank every time I entered a winery and was asked for my ID. By the third place we visited, before entering I was already mumbling robotically ‘I’m not drinking, don’t worry’ and sitting in the furthest corner from any open wine bottle. Nevertheless, this was a fun sociological experiment, being by far the most sober person on a bus with two hen parties, some fancy frat boys and a couple of older Americans who were trying to seem cultured. I got to study up close some stereotypes of American movies and wonder to what point are they just stereotypes when I saw scenes of ‘The Bridesmaids’ played out in front of me. Bridesmaids are vile, especially after some glasses of wine.

Next up, as I entered a plane to Las Vegas I took another step down on the cool ladder. Vegas is fun but it’s anything but cool. Into the scorching sun and boiling heat of this crazy playground someone decided to build in the middle of the desert, I went. Never had I seen everything so big. It was ridiculous, the line to check in at the hotel looked like the entrance to a hype club, it had a bouncer opening a rope barrier. Even breakfast was big, yogurt with granola was considered a side… Which I happily ordered and struggled to finish.

Here, again, bucket list in hand, I got to experience something I never thought possible, I had dinner under the Eiffel Tower, overlooking Caesar’s Palace and minutes away from Venice’s canals. The surreal mixes up with the gigantic in this melting pot of utopian cultures that culminates in a camp universe of unhinged fun. I couldn’t really make sense of anything, not when I saw lonely older women lose hours in front of a slot machine and not when David Copperfield made a Corvette disappear before my eyes - yes, I went to the show (minus 2 points on my hype status).

This city did not cease to impress me. The highest point of my time in Vegas, and I mean the highest, was the helicopter tour of the Grand Canyon. And… to move things further to the basic bitch realm, what came to pick us up at the hotel? A limo. A big, fat, black with shiny blue lights limousine. Believe me, we tried buying the tour without the limo, to make it cheaper, but it was not an option. Every single company provided a pick-up limo, that’s just how America works, folks. I award myself 3 points for the helicopter, subtract 2 for saying ‘wow, what’s that gold building over there?’ (aka the Trump tour) and remove further 3 for enjoying a cold drink in blue half-light while compulsively photographing every detail of the limo’s bar, plus a few selfies.

We spent three nights in Vegas, it was one night too long, by the end we were wandering the malls aimlessly, I even signed up for a make-up class at a beauty store for entertainment. Being 18 in an American casino is no fun. Although I have no desire to throw my money away I would like to be able to say I pulled a lever of a slot machine in Vegas but no, I was not allowed to stand still next to any machine or table, I had to keep moving - sure got my step count in.

In LA I slightly revived my coolness when I got a smoothie at the trendy corner café where I felt overdressed because I wasn’t in gym clothes and choked on my valley accent when ordering an “All-Green”. Soon lost it again when I gushed over Marilyn Monroe’s printed hands on the Walk of Fame and took a feet selfie with my first ever love’s star, Winnie The Pooh.

One night we dined at Nobu, because you have to, although, and I’ll be shot for saying this, I have had much better Japanese in other places for half the price. Nevertheless, it was absolutely worth it because this was my first celebrity sighting. Chopsticks in hand and salmon sashimi slipping out of my mouth, I look up and see Pharell Williams cruising along my table and swiftly closing a door to a secret room next to me. I would wonder if this had truly happened if his wife and kid hadn’t followed suit and I hadn’t Googled their faces right after. I guess we got too excited with our first celebrity, as the next day I claimed to have seen Robert de Niro coming out of a restaurant and my Dad insisted that a woman running at the beach in Malibu was Kate Hudson. Most probably not.

If you think I’m lame already, you should have seen me at the film studios. Paramount, Warner Bros. and Universal. I fangirled hard over movie memorabilia, especially when sitting at Central Perk and holding a real Oscar. My inner child went crazy at the Wizarding World of Harry Potter, when a wand chose me and when I entered Hogwarts for the first time, after grieving for my lost letter at age 11. At Paramount the entrance was sight enough to thrill me and hearing the stories of Hitchcock and Edith Head left me daydreaming.

What else? (please read in George Clooney’s voice).

This was probably one of the most fun trips I ever took, I never felt so mainstream in my life and I loved it. However, I guess I live in East London for closure now.