A Day in Lisbon with Anaís 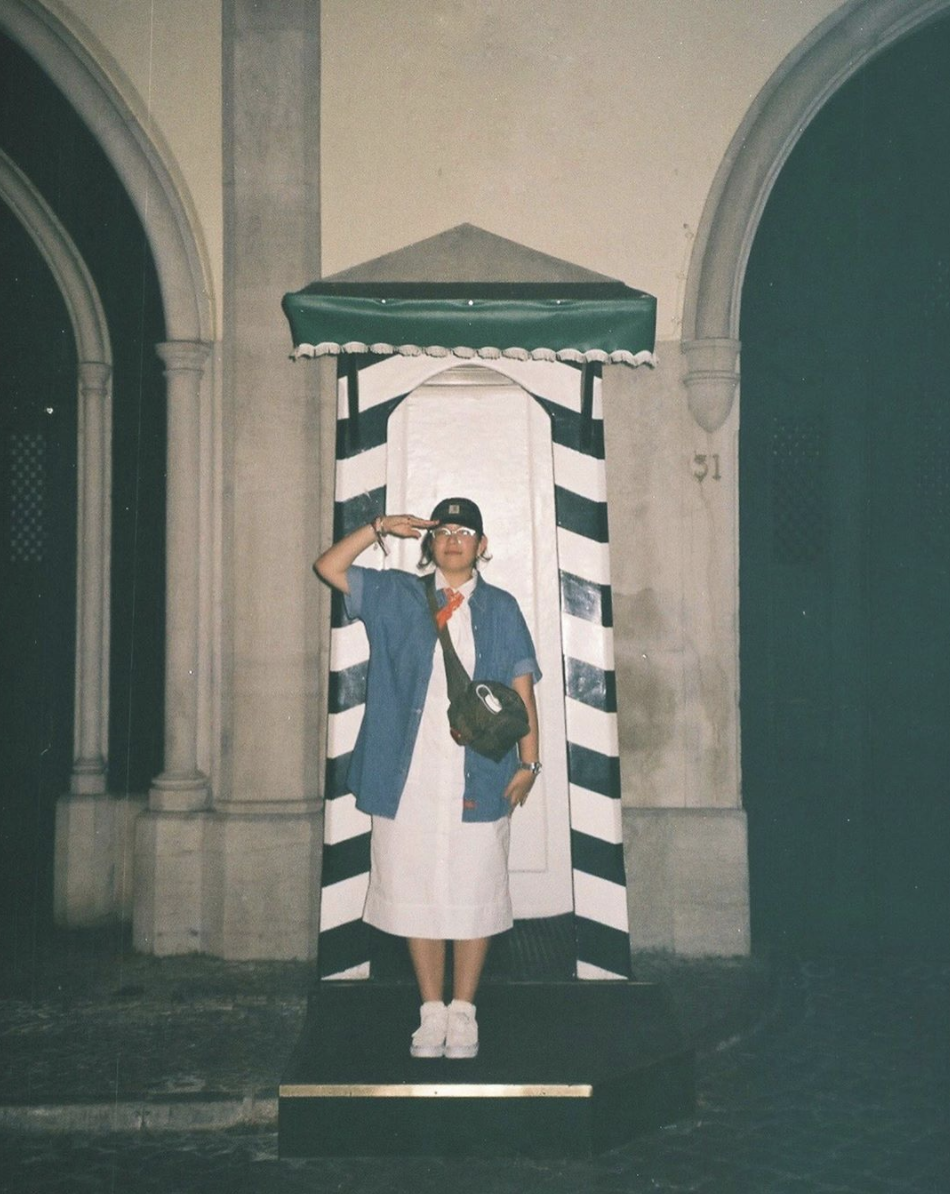 My name is Anaís Almeida (@anaisalmeidae), I was born in Caracas, Venezuela but raised in Lisbon, Portugal. I’m a graphic designer with a very big passion for typography, which made me discover and analyse new ways of type around the city from street signs to those bomb tags from graffiti artists. In fact, graffiti and street art are a big part of the city’s imagery. Growing up, the city centre and the old neighbourhoods were not of my interest, but getting older they grew within me. I started to visit them regularly during my teen years, flea markets were emerging in the city, my passion for photography too and I just loved going to the city with my friends. A couple of years later, as I went to college, I started to explore the city after class. Not only was I In the city centre as I also was on a very typical neighbourhood which helped me through the entire discovery of the city.

I must say, I’m guilty of going to the cute cafés and instagrammable places to eat. But in my defence, those places are the only ones that will serve me a good flat white and understand the coffee culture as much as I do.  Besides coffee, avocado is a must for me at breakfast and that comes from my Latino heritage, I’ve been eating them since forever. So with those two in mind, I would probably head to an Australian coffee shop named, The Mill, it not only serves high quality coffee as it also focuses on very good food. My go to order here is a smoked salmon bagel with avocado on the side. But if it’s a little bit later or I want to eat something more on the breakfast side, I would go to Nicolau or any of its sister restaurants (Amélia and Basílio). There I would get the brunch menu, it includes a bowl of yogurt with fruits and granola, a pancake with maple syrup (little secret, take some fruit of the yogurt and put it over the pancake) an avocado toast (as I usually go with a friend what we do is we order 1 avocado toast and 1 salmon toast and have half and half) and to finish depending of which of the restaurants I’m in, it brings scrambled eggs or I order them as extra. This whole bombass combo comes with a juice of choice and coffee.

Where is your favourite place to grab lunch?

I have only one option for this, I’ll go to the ‘Ilegal Chinese’ (that’s how we call it here in the city and in fact it the name google gave it.) One of the reasons I go there is due to the spicy food, I’m a fan! This spot is known to be the perfect place to eat Chinese in the city, but it’s also a kind of secret restaurant.

What is the ideal afternoon activity in a city like Lisbon?

As an evolving city, there are plenty of activities. One of my favorites is only possible os Tuesdays and Saturdays, it’s the local flea market named Thieft Market (Feira da Ladra) as this was the place where robbed goods where sold to new owners. I also like to go to Underdogs Gallery, one of many projects by Portuguese artist Vhils. It encompasses a long list of national artists like Wasted Rita, AKACorleone among others, and international ones like Shepard Fairey, Felipe Pantone or even the multitalented artist, DJ Fatboy Slim.

Where are the best places for dinner?

As I want to give more options around the city, I will not give the same answer as I did for the lunch question. I must tell you that if it’s someone’s birthday or if it’s a group dinner we will probably be at the Chinese place as it’s an enormous space with great food at an amazing price point.

One of my favorite things in Lisbon is the combinations of Indian and Portuguese cuisine. Here in Portugal, we have a lot of ‘churrasqueiras’ which is a barbecue restaurant where most likely you’ll order some piri-piri chicken. And this is the place to get the best one in the city. So where does the Indian side come in?  Well among many stories, there is one that says a Muslim family came to Portugal a few years ago, and even though they wanted to have some chicken they couldn’t as the meat wasn’t halal. And that is how Churrasqueria Zubir was born, a restaurant with something like 15 seats or less, where you will always find a queue. My go to order is one spicy chicken, some garlic naan, and rice (all the plates come with rice and chips), and OH MY, it’s so good! It’s a crazy combination of flavors that will make you so happy!

The second place is a kind of a new spot in the town and it became an instant favourite, Lupita Pizzeria. This pizza place in Cais do Sodré was curated by Anthony Falco, an international pizza consultant. And as a food enthusiast and a searcher for great Neapolitan pizza, I found this place. I will not complicate my order here, a classic margherita, however I will spice things up with a ton of spicy sauce. And depending of my mood, I’ll order a burnt Basque cheesecake to share. This is the spot I’ll suggest if I’m meeting a friend for a relaxed dinner over the week.

In the evening, what is the city like and where do you find yourself?

If it’s a night out usually I have two plans that hardly change. After the diner plan I would go to Bairro Alto or Cais do Sodré and have a few beers, a typical thing to do is a chill bar crawling as the bars on both spots are extremely small and would be almost impossible to have a good time inside. After this I would go to a hip-pop party, my mandatory one is Crack Night by DJGlue one of the pioneers of electronic music in Portugal and a former member of one of the most successful bands in Portugal, Da Weasel. The party is at one of my favorite clubs - MusicBox, located on the iconic Pink street. As soon as you get in you will see Lisbon’s ‘cool kids’, all the BBoys and iconic DJs that will battle with DJ Glue and have a solo during the night too. Another party that I also like at Musicbox, as well, is from a DJ group from Porto, named Monsterjinx that will come to Lisbon every 2/3 months for a party full of hip-pop, r&b and some rap.

In a busy city like Lisbon, is there anywhere to chill?

I would say that yes, I will give 3 spots that are a must for me. The first one is in Cais do Sodré, inside the most important store of the Lisbon graffiti scene, Crack Kids Lisboa. The store reunites the creatives in the city, it is all about street culture. Recently they opened a little taberna , a modern tasca, as they say, called Ordinário. You will find some snacks like halloumi with kimchi mayo or maple glazed bacon, or some beers and margaritas for the perfect sunset mood. An important note is that it's something like 6 meters from the river, so you might get to see some dolphins. Ordinário, even though it is a new spot in the city, it instantly became one of my favourites spots due to the location, service and variety of food. You can have lunch, dinner or just some snacks with friends.

The second spot is Park Lisbon, a rooftop bar in the city centre with an amazing selection of cocktail, music and food, if you go there, have a mojito, they are really good. The last one can be enjoyed both sides of the bridge, and it literally is chilling next to river, around Ribeira das Naus or Cacilhas.

What is there to do for something fun and different?

Maybe it’s me but two thing I really enjoy to do is to go Feira da Ladra, the market I mentioned before and after that get a bowl of freshly made Pho from one of the only Vietnamese restaurants in the city. I don’t mind doing this everyday at anytime, summer or winter, I will do this plan!

Where is the best area to stay/sleep for young travellers?

If it’s not summer time I would recommend to stay on the Graça neighbourhood or Principe Real, they are very central but far enough to have a little break from the city madness. If it is summertime, I would suggest the area of Cascais, you may find a spot for a relaxed morning swim to take in the warm season of Portugal.

What season would you recommend visiting?

I would recommend without a doubt Spring time, you might get some warm days, a chilly day and night but you will not miss the sun. Ps- Lisbon is one the brightest cities in the world due to the ‘calçada Portuguesa’ (the pebbled white streets)’s reflection of light so always pack some sunglasses.

Is Lisbon best for a family holiday/ friends holiday or couple holiday?

Lisbon is a super diverse city; I would say almost everything I mentioned can be done with friends or with family. One thing for example that you can do with kids is taking the hippo tour, it’s a tour bus that on the end of the ride transforms itself into a boat and you will also see the city from the river. But if you are with friends you can do a very similar plan but quite different at the same time, go to a boat party on an ancient Caravela, you will get your drinks, Dj sets and a blast on the river while you see the sunset.