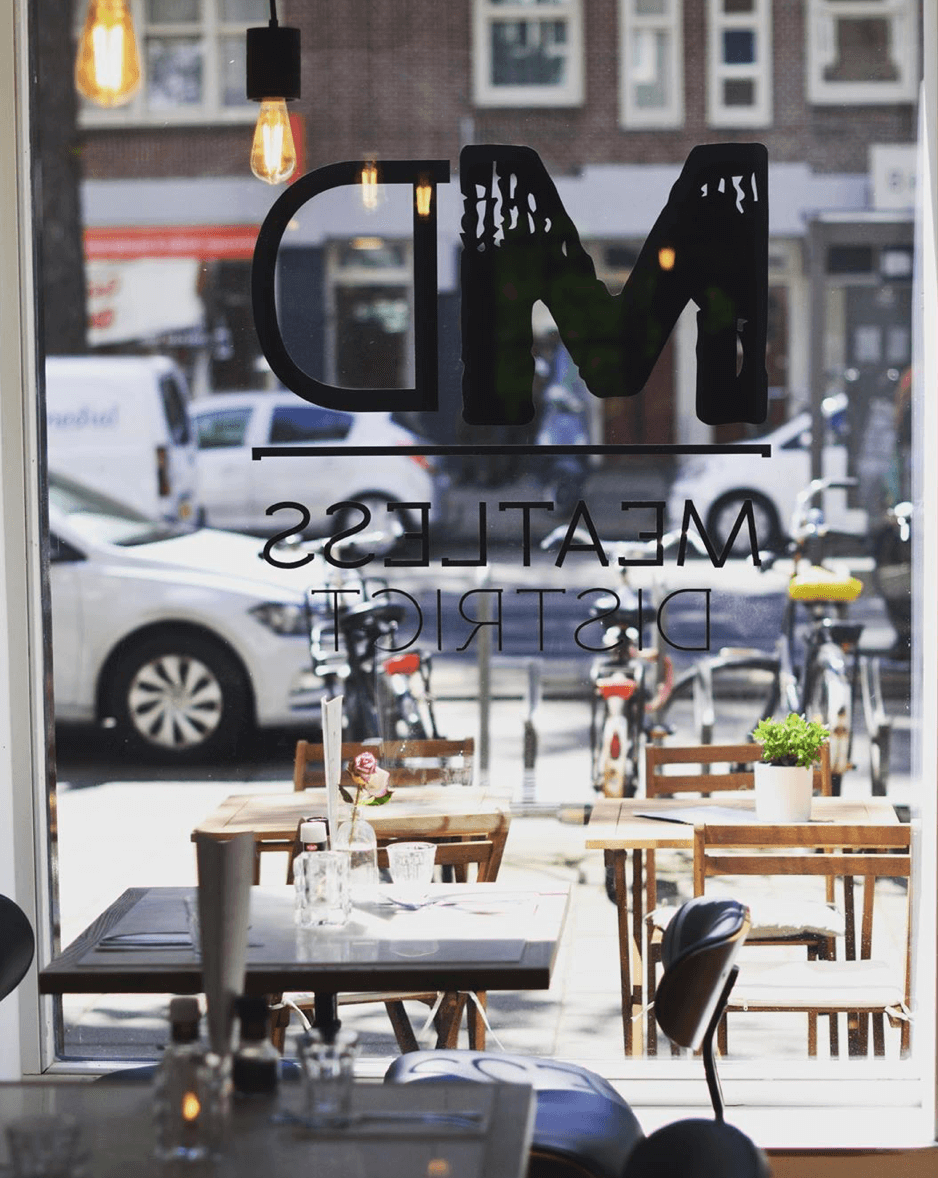 In recent years Amsterdam has burst onto the scene as one of the world’s vegan capitals, with many of its restaurants and eateries making the transition from meat focused menus to incorporating more vegan and vegetarian options. Nowadays, it would be hard to come across a non-vegan friendly restaurant, so if you’re travelling in Amsterdam be sure to make the most of their incredible selection of vegan options. From vegan cheese platters to avocado burger buns, for both vegans and meat eaters The Netherlands’ capital has it all! This guide to the best vegan eateries in Amsterdam will hopefully help narrow down the top spots and ensure you have the best culinary experience whilst visiting this amazing city.

One of the most popular vegan spots in Amsterdam is the Vegan Junk Food Bar, which has now expanded to 4 locations across the city with each branch offering different menus and unique atmospheres. The Vegan Junk Food Bar is inspired by the classic Dutch snack bar, and true to its name only serves vegan junk food and cocktails to allow its guests to fully indulge and treat themselves. They serve vegan bitter ballen, a Dutch delicacy that traditionally consists of deep fried meat croquettes, as well as ‘cheesy’ spring rolls and onion rings to complete their star sharing platter. Other popular dishes include vegan sashimi and different variations of loaded fries, all topped with vegan mayo and their plant based shawarma. If you’re looking for a cheat meal and a chance to splash out on delicious snacks and burgers, the Vegan Junk Food Bar is the place for you - safe to say you won’t leave hungry!

For those who crave the creaminess of cheese and struggle to find a vegan replacement that does this dairy delicacy justice, look no further than Mr & Mrs Watson! Famous for its selection of vegan cheeses made with cashews, their most popular dish is the vegan cheese platter, which features an apricot-cumin cheese, tofu feta and an almond cream cheese. Adding to the list of vegan comfort foods, their menu also includes a pulled no- pork BBQ sandwich and vegetable croquettes, not to mention the cashew Roquefort fondue served with bread and steamed potatoes. For dessert, be sure to sample their raw cheesecake that changes recipe and flavour each day. Named after the founder of veganism himself and with a fancier feel to it than most vegan restaurants, Mr. & Mrs. Watson is the perfect date spot or the place to visit if you feel like indulging without the guilt!

Next on the list is Avocado Show, a restaurant all vegans and avocado fanatics are bound to have heard of, if not only for their avocado burger bun, which circulated Instagram before their opening and resulted in constant queues at the door when they opened their branch in the trendy De Pijp neighbourhood. As Europe’s first avocado based restaurant, it has paved the way for vegan pop ups with the same idea in cities such as Madrid, London and Barcelona. Their menu isn’t entirely plant based however, with some dishes featuring salmon or chicken, so this is a great option to try if you’re dining with a meat lover but want to stay healthy! Amsterdam’s green gastronomic experience features sustainably sourced avocados as the star of the show in dishes such as avo fries, poached eggs served inside an avocado and the famous Bun Burger, in which the avocado replaces the burger bun for a healthy take on the burger classic. Head to their new location in Amsterdam Zuid to avoid the queues and snap a pic of their instagrammable dishes and signature green leafy wall.

Inspired by the meatpacking district in New York, Meatless District opened its doors in Bilderdijk, Oud West to bless the neighbourhood with its industrial aesthetic and incredible vegan dishes. Their most popular dish is the MD Burger, which includes an aubergine patty and fries with vegan mayo, as well as their vegan ‘cheese’ croque monsieur and Caesar salad on the lunch menu. For those that fancy a drink with their meal, Meatless District also serve vegan wine! This is the perfect place to go for a few drinks and some guilt-free good food, and due to high demand they’ve now opened a second location in the popular De Pijp neighbourhood, so be sure to check them both out. A top tip is to head there on the weekend to try out their boozy brunch menu, especially the vegan full English breakfast and vegan pancakes, and to sit near their open kitchen to watch the chefs prepare each Instagram-worthy dish!

The last vegan hot spot in this Amsterdam guide is Vegabond, a plant based market deli and café at Leliegracht. There is now a new location also in Oud West, but when Vegabond opened its doors in 2014 they were the first fully vegan deli in The Netherlands, and over the years their popularity has only grown. Their deli offers an incredible selection of dishes that you can take away or enjoy in their café, seasonal dishes including vegan ‘coleslaw’, homemade burgers and a delicious selection of raw vegan cakes and cookies. The highlight of Vegabond is, however, their vegan stroop wafels! A traditional Dutch treat, stroop wafels are usually made from wafer cookies joined with a caramel filling, and now vegans can enjoy this delicious snack too - they sell fast so be sure to grab some in their grocery section. Vegabond’s store section prides itself on only selling 100% vegan products, so this is the perfect place to stock up on vegan snacks such as their homemade Snickers bars to fuel your day wandering around Amsterdam!

A trip to Amsterdam would not be complete without sampling their famous cheeses, stroopwafels and bitterballen, and now vegans won’t be missing out on savouring these Dutch delicacies. Hopefully this guide has left you well informed and ready to dig into some of Amsterdam’s best vegan dishes, and with so many options ranging from healthy meals to treat-day comfort food, it is no surprise that Amsterdam is one of the world’s vegan capitals!