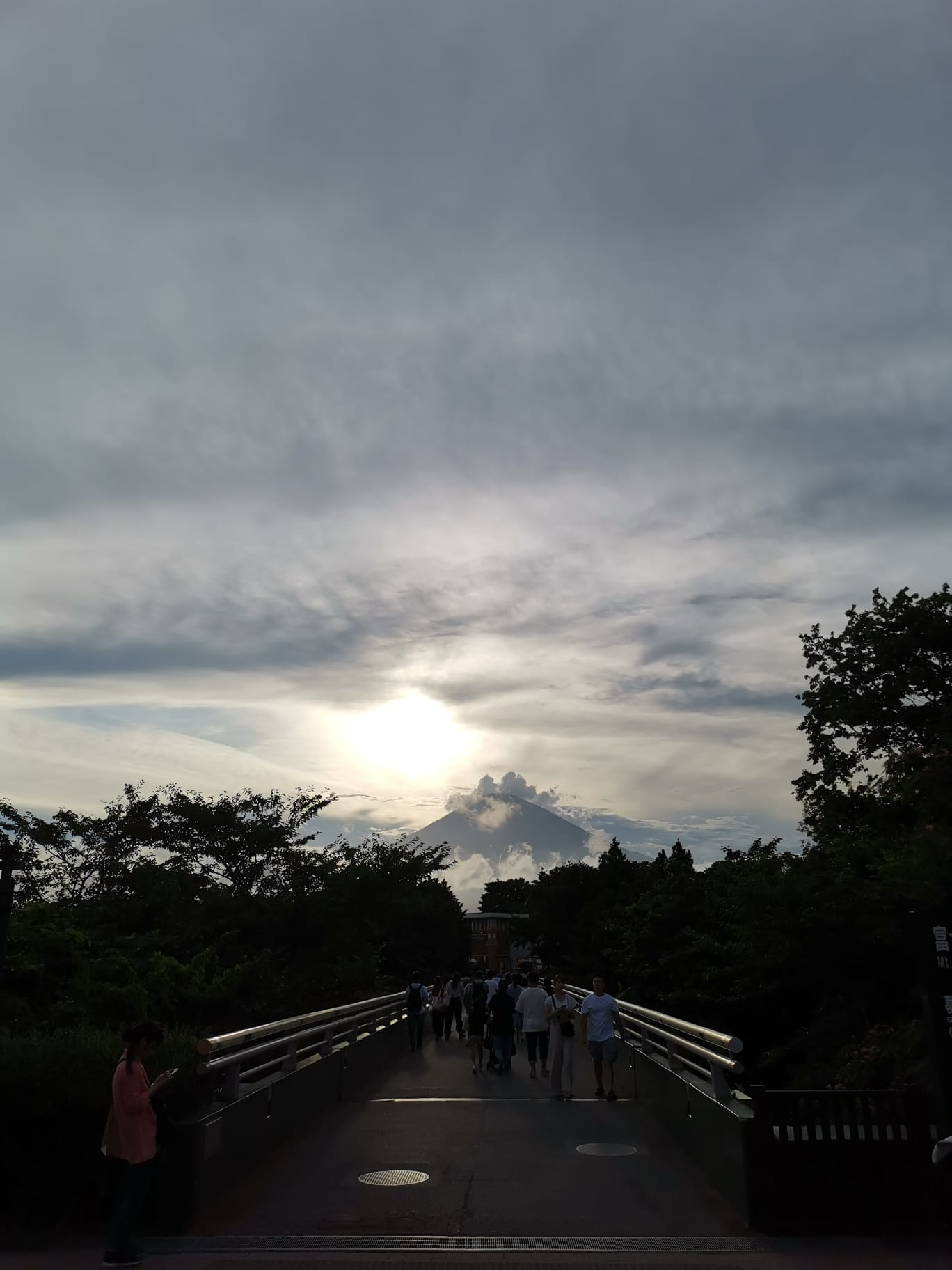 I spent almost three weeks in Japan. Riding high-speed trains up and down the country, as this is without a doubt the best mean of transportation. The trip cut short by eminent minor hurricane - watch out for those. Here’s where I went, what I did, ate and wondered about in this land of ‘duality’.

Arriving in Narita airport close to Tokyo is one of the most direct ways to travel to Japan, within an hour on a high speed train you can get to the capital, disembarking on a train station that could easily have been found in Europe. Wherever you chose to stay in Tokyo, it’s easy to reach as their public transportation is superior to most.

In this city, you have two opposite routes to take, and you must take them both: the past and the future. I believe there is no present in Japan, you come to see the past where tradition reigns such as in the Castle, the temples and the fish market and suddenly you turn the corner into the future of game machine parlours, architectural skyscrapers and hi-tech multi-media art. There seems to be no middle-ground.

Visit the Sensō-ji and take a trip to the shopping avenues of Ginza.

Go to the Tokyo Imperial Palace and experience one of the TeamLab interactive exhibitions.

It’s all about balance, maybe if you do a bit of future and a bit of past you will find yourself in the present.

I wouldn’t have minded spending longer in Tokyo, there was still a lot to see. I guess we took a more external approach to the city, in the sense that we wanted to explore the neighbourhoods and understand how the city came together and what made Tokyo itself, more than going into museums or diving deep into the guided tours of monuments. As an art lover, I wished I could have gone to the Mori Art Museum, the Museum of Contemporary Art and the Yayoi Kusama Museum, but time was short - for the latter you have to book tickets prior, we tried two weeks in advance and there was nothing…

So, I urge you, my dear reader, give Tokyo a little longer, you will not regret it.

Curious random tip: There are hundreds of vending machines scattered around most cities, just out in the open, and these are some of the few places where you can find bins (not in all of them though), but only with bottle-shaped holes, so the rest you have to carry with you until you get back home. Don’t litter under any circumstance.

On a day-trip we went over to a temple town, north of Tokyo. Here you can have a feeling of what Japan looked like before the future settled in. Be prepared for a bit of a climb and to enjoy the environment on foot, from the bridge to both temples and back down to the little village where you can savor a truly authentic japanese meal.

The food speciality here is an extremely rare delicacy I have only seen in Japan and had never dreamt of before. It’s called Yuba. What is it? Well, do you know when you heat milk and it creates a kind of skin on the surface? Yuba is that skin, but of soy milk. What does it taste like? I am sorry to say but: absolutely nothing… It gains flavour from what it is paired with, I guess…  The good part is, it’s very healthy, nutrient and mineral heavy, low in calories, no cholesterol, good source of protein and 100% Vegan. If you can get over the lack of flavour…

From Tokyo, with a layover in Odawara, where there is a beautiful castle-museum (if you have the time), we took the train to Hakone.

Here is where you can get closest to Mount Fuji and it is also a thermal area where you can enjoy traditional Japanese nude baths called Onsen. Stress nude and remember to book ahead, if you’re willing to be butt naked in from of same sex strangers. Despite sounding appealing, I was not able to experience it as we hadn’t reserved in advance and it was fully booked for the two nights we were there.

Although it might sound obvious, there are no actual tours to Mount Fuji, unless you want to take up intense hiking, as the beauty of it lies in experiencing it from afar. Also mind that in the Summer the tip is not frosted in white as there is barely any snow in the mountains - it was heartbreaking at first. As our list of things to do was getting shorter we decided to try a designer outlet in the area to scavenger for Japanese designers, the shopping was not worth it, but the location got us the best view of Mount Fuji at sundown.

Something that is a must in this town is getting on one of the fairytale-looking ships and cross the lake of Hakone to explore all of the little villages surrounding it, here you can find some great handmade products and authentic towns.

Most restaurants in smaller places in Japan are often long-established eateries serving the same traditional food for years. To our surprise, Hakone had one of the best restaurants I have ever been to and I can unashamedly tell you we went there twice for dinner, in two nights. The Gora Brewery & Grill is a modern stylish house with an open kitchen that stands in front of a wall-sized window to a Japanese garden. They makes their own beer, hence brewery. It also happens to be in collaboration with Nobu, so you take your own conclusions. My tip: skip the sushi and try all of the fish tatakis, grilled seafood and according to the meat lover I travelled with - the meat is divine.

From Hakone to Kyoto, always on train. When on the high speed trains, at 300km/h, looking out the window might be dangerous business if you have just had a large meal but if you can manage the feet you will be surprised to see hardly any green or agricultural areas as you usually do on train journeys. Japan has construction covering almost all of its surface.

Kyoto is the core of Japan, everything you ever imagined of the country you can probably find here. The narrow streets with wooden houses, beautiful floral gardens, chairs with no legs, tables the height of your knees and geishas in kimonos and wooden block heels. Tokyo is more commercial, Kyoto although very touristic as well, feels more authentic. This is a must on your Japan tour.

At this point, I have to say all temples look a bit similar, but not the ones in Nara. More than having one of the biggest shrines in the country, this area is very special because of its inhabitants. No, not the Japanese people - although those are great too - but the Japanese deer. We were told there was a big national park that protected and housed hundreds of deer but soon came to realize they either wanted a bigger home or were not that happy in the park as they are everywhere. The city is packed with them just roaming freely. I am uneasy around any type of animal, in Nara I kept looking over my shoulder the whole day, although I have to admit Bambis are pretty cute.

And on a train we go again, something to appreciate of Japanese culture is the importance they give to hygiene and respect towards others. Whenever waiting to board a train, in the designated area painted on the floor, obviously, the cleaning team would enter ahead, clean it swiftly, come back out, line up in front of the train and bow to the passengers about to enter it. It’s such a simple gesture that made us westerners have a dumbfounded smile on our faces.

Here in Osaka it was where things were cut short, from 5 to 3 night, it wasn’t that much of a hit but still it stopped us from going to Kobe or exploring Hiroshima properly. Osaka is the commercial centre of Japan and as such offers more commercial activities such as The Universal Studios Japan or the Aquarium, but if you want to have a true Osaka experience you have to go to Dōtonbori, where nightlife unravels. I have no better word to describe it other than insane. There is just so much happening you don’t know where to look.

Here, we went to see the magnificent water standing temple - that happened to be under construction… So all we saw seemed to be floating scaffolding.

Still the island has its charm, being focused on local tourism, it offers a wide variety of street food, things I can’t describe and only have a slight idea of what I was eating - a must-try - and handmade souvenirs. The Pacific surrounds this island with beautiful crystal clear water simply whispering your name through the motion of the waves for you to freshen up in the boiling weather. Nevertheless, no one does so, the majority of tourists which are Japanese don’t even glance twice at it from under their sun umbrellas. We were quick to grab another octopus leg on a skewer and come back to the boat as the weather was unbearable on this day.

We only allowed a one-hour train layover in between the island and Osaka to visit Hiroshima. Got on a taxi and went straight to the Peace Memorial, where a building stands unrecovered from the damage of the atomic bomb during WWII. Time didn’t allow for a visit to the museum but this building is sight enough to leave you with a knot on your stomach.

Japan was one of the most rewarding travels I have ever been on. The culture shock is so great it makes you rethink the way you live in your little part of the world, how much we don’t know and how quick we jump to judge anything that doesn’t fit our standards. Here, where nothing makes much sense to you, you learn to live differently, and balance out and you have and what you’ve gained. I recommend everyone who has the opportunity to do so to come to this country.