I Visited the #1 Beach in the World 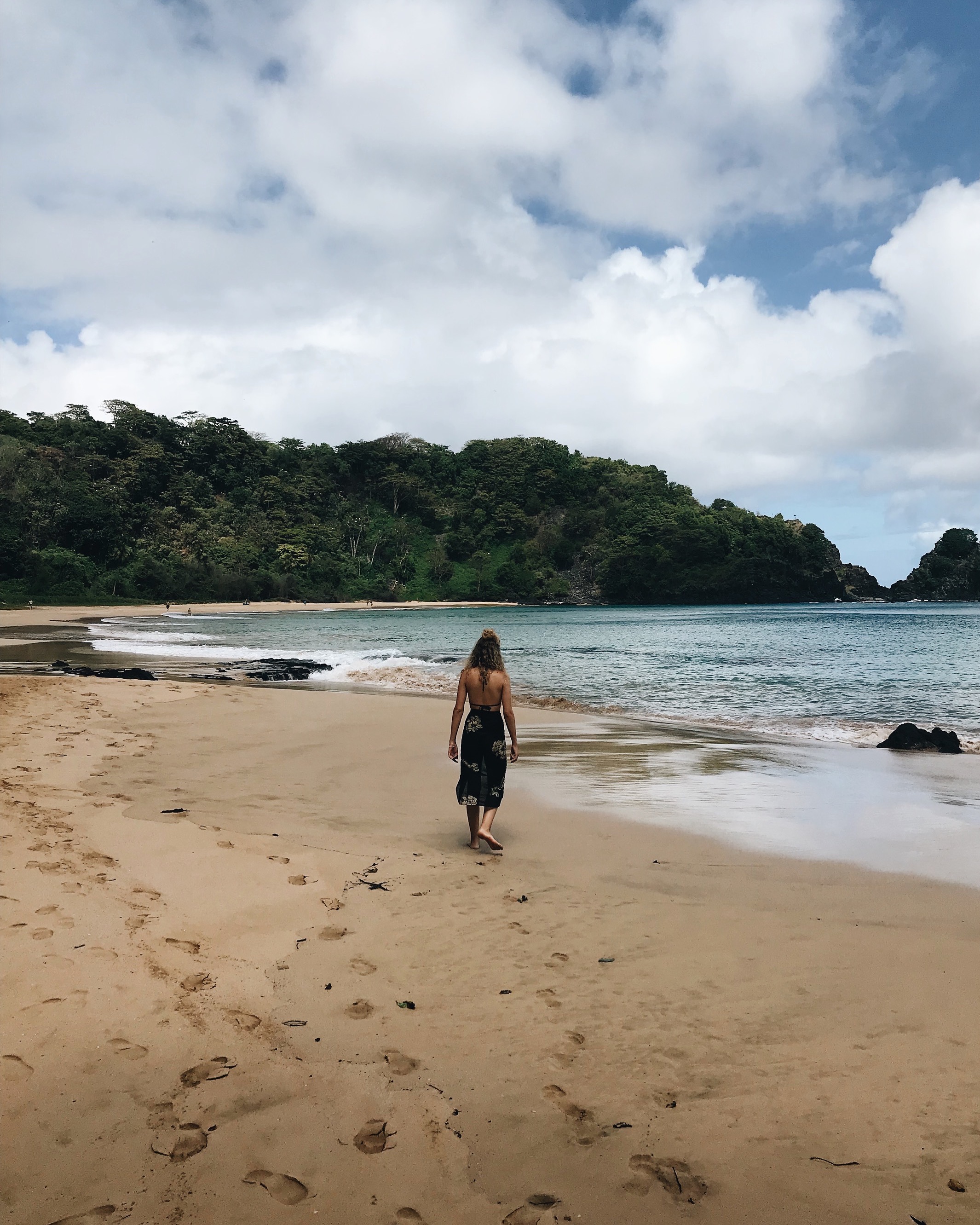 I’m not entirely sure I believe in astrology, but like any other gen Z, that doesn’t stop me from indulging in it every once in a while - I follow the instagram accounts, read the twitter predictions, and can tell you all about my sign compatibility. Recently, however, I discovered that there’s also such thing as a moon sign (who would’ve thought), which helps depict your personality more accurately based on the exact time you were born. Mine’s Pisces, which I read somewhere means I feel very connected to large bodies of water. It also means I’m dependent, evasive and self-indulgent. Whatever.

Ever since I found out about my moon sign, I have been acutely aware of how much I enjoy being by the sea. There’s something quite appealing about the constant crashing of waves and the feel of bare feet sinking in the hot sand. Perhaps this love derives from my moon sign, but quite frankly it’s probably got more to do with the fact that being by the ocean is just plain-old nice.

My first (and so far most exotic) beach holiday was to Fernando de Noronha, a collection of islands (out of which only one is accessible to the general public) off the coast of Brazil, home to a myriad of enviable beaches and spectacular wildlife. With a little over 3000 habitants, Noronha is a popular sustainable tourism destination which seeks to find a balance between nature and mankind in the Brazilian eco-sanctuary. It’s a peculiar place to visit for a number of reasons; there’s only three daily flights to the island, more than half of the territory is deemed a national wildlife park, plastic containers are forbidden and you’re only allowed to stay for a maximum of 30 days.

It’s what I imagine Hawaii to be, but without cafés and an overload of instagram-wannabes.

The first thing you notice on the island is that you can’t exactly walk everywhere. It is considered small, but you must remember that this is Brazil, a country so big that the entirety of Europe fits inside it. This is why a lot of tourists opt for renting a buggy or a motorbike, costing around 30 EUR  per day and, although far from being the most sustainable option, is a quirky way of getting around. Also, offers a lot more flexibility than having to rely on the alternatives; an unpredictable bus system or expensive taxi rides.

Because we didn’t rent a buggy ourselves, the first thing we did upon arrival was to book an all encompassing island tour, which I have to admit was a little unexpected seeing as we never go on these kinds of things. My family tends to have a more DIY approach to travelling, so visiting the island’s hotspots all in one go, surrounded by strangers, definitely felt like a far cry from our usual shenanigans.

We got picked up at the hostel at around 8am by a large, tanned man wearing a safari hat and thick rimmed shades. Being the first to arrive meant we got to choose the best seats in the pick-up-like truck we were using as transport for the rest of the day. The remaining six or seven people got picked up from their hostels soon thereafter and once we were all on board the truck stopped in the middle of the street so we could pick up snorkelling gear from this caravan parked on the sidelines. We were the only vehicle in this long paved road that crossed the island.

And so that’s how I ended up at the world’s #1 most beautiful beach - Baía do Sancho.

Think long strips of sand and warm hues of a colour which seems almost pink. Think water so piercingly blue it looks like God slapped a VSCO filter onto it, only to then up its vibrancy to the max. Honestly, it’s beauty is practically shocking.

Perhaps the best part is, that for the world’s best beach, it’s surprisingly empty. But there are a few reasons for that. Firstly, it’s located within the conservation area of the island, meaning there’s a whole load of regulations in place to avoid the masses. Secondly, it’s surrounded by tall green cliffs which are relatively hard to climb down; there's a single, man-made ladder everyone queues to go down on, which as far as I know is the only way in and out of Baía do Sancho.

Despite its naked-eye beauty, the best part comes when you make use of that snorkelling gear you rented and dive into the sea. Watch out for the waves though, as they crash very near the shore (Talking from experience here, a wave made me dramatically fall on my butt right in front of everyone). Without needing to paddle too far, you’ll likely come across colourful fish, and, if you play your cards right, you’ll even get to see big marine turtles, which will probably become your new favourite animal.

What’s funny is that despite the title, the world’s best beach was not my favourite on the island. Over the course of the next few days, we visited a bunch of different coastlines, both on the mar de dentro and mar de fora (meaning inside and outside sea). The ones on the western side of the island (mar de dentro) benefit from clear-blue sea, tranquil waves and beautiful coral reefs. They are your idyllic tropical paradise beaches - the sorts you’ll see on flyers and travel agency ads. On the opposite end (mar de fora), the waves are wilder and the sea is darker, which makes for a more striking scenery, albeit more dangerous. My favourite, however, became the lesser known beach of Praia do Bode, accessible via the rocky end of Praia da Caçimba do Padre. It feels more private and secret than the rest, and because it’s not exactly on the island’s hotlist, it’s easy to find yourself on your complete own.

When it comes to snorkelling and diving, Noronha is perhaps Brazil’s finest destination. If all you’re doing is snorkelling, head over to Praia do Porto, the beach by the island’s port. Because of the many fishing boats on the dock, it can seem like a less appealing place to snorkel, but for some reason it hides the island’s best marine life. From turtles, to shoals of fish, to manta-rays to sharks.

Although you’re safe since they apparently don’t bite, they are terrifying to see, especially since they hang out very close to the shore. So watch out if any shoals start swimming past you with urgency; it tends to mean a predator is nearby.

At this point, it’s also worth checking out what scuba-diving deals are on, particularly since you don’t require a PADI licence for some of the trips (this, for those of you who don’t know, is a qualification you need to get to be able to dive deeper than 10m deep). Even on a complete beginners course, you get to explore a shipwreck and dive inside a small portion of it, not to mention you get to see the wildlife up close and personal. The average price for a scuba-trip can depend and fluctuates greatly. It isn’t the cheapest activity out there, but if you have the possibility to splash on something like it, I would highly advise you to.

Another popular activity on the island is the subaquatic board, a thrilling way of exploring under the sea. It essentially consists of a plastic or wooden slab, attached by a rope to the boat that, depending on its incline, helps you submerge yourself and come back up with little to no effort. I would recommend booking one of the boat trips to see the sunset, some of which even offer dinner on board.

When it comes to accommodation, the island lacks big resorts and hotels which bathe in luxury. It’s part of the general appeal; simplicity. Most of the accommodation is marketed as “hostels”, but tend to be very different from the European ones - you know, big rooms with shared bathrooms and bunk-beds. Instead, ours consisted of a private en-suite inside a one storey building. The only shared amenity space being the breakfast lounge, where a lovely lady cooked up cakes and omelettes for the guests every morning.

When it comes to food on the island, although there are plenty of restaurants around, they tend to be on the pricier side of things. But there’s also supermarkets, which I highly recommend as a more affordable alternative, especially if you’re interested in packing some sandwiches to take on your trips. This tends to be a wise idea since there are very few places serving food once you enter the wildlife reserve area of the island. On that note, certain beaches offer coconut water straight from the fruit, usually sold by islanders that walk around barefoot trying to sell them - buy at least one, you’ll thank me later.

So that’s all the insider scoop on Fernando de Noronha. From aquatic activities, eco-tourism and sunsets to die for, the island has all the ingredients for an ideal beach holiday. I would not be surprised if this island’s popularity soared in the coming years, so make sure you book yourself a trip soon to avoid the crowds!