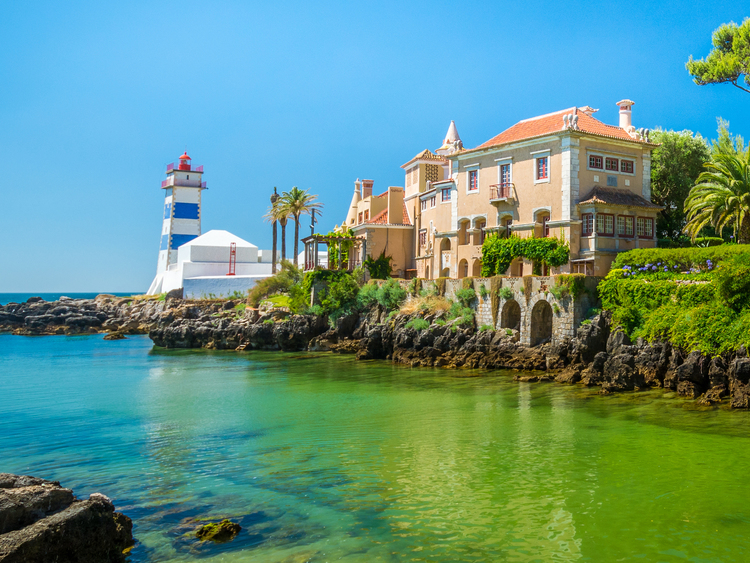 When someone asks me where am I from, I usually say:

With the description above I’m often afraid people are left with the idea I live either in an ugly concrete block of apartments and I’m trying to make it sound pretty, or somewhere in the setting of ‘Il Postino’, in a cave.

Then I am compelled to show them a picture, do me a favour and google ‘Cascais’.

This is essentially what you’ll find:

Usually, I am met with amazement and am asked why have I ever left… Well, that’s an answer for another episode. On today’s show I want to tell you why you should visit my hometown.

*Posts picture and leaves* (shortest assignment ever - nailed it)

As everyone knows a picture is worth a thousand words but an image is not always all that meets the eye. I am still not content with the advances of technology until I get a device that can transmit smell. Every morning in Cascais, when the wind is hitting just right, I open my window and smell the ocean. From every balcony and window you can see the Atlantic.

Estoril is a town that is part of Cascais, during the 20th century it was known all over Europe for being a luxury beach destination for monarchs. During WWII, as Portugal happily stayed neutral, Lisbon and especially Estoril was populated by spies that used to parade ‘discretely’ around Hotel Palácio. Ian Fleming, the writer of the Bond series was staying at the hotel during this time and is said to have been inspired by its environment and secretive guests. For the sixth film of the James Bond saga, named “On Her Majesty´s Secret Service”, most of the location shots were filmed in and around Estoril and Hotel Palácio. Today its fame has decayed but the place hasn’t, and it is still home to numerous high profile expats and to luxury.

Having this aura of luxury surrounding it, it might seem Cascais is an expensive place to visit but it’s actually not, unless you go for the full- on James Bond experience. It is around as expensive as Lisbon, which is to say, compared to other European destinations, pretty cheap.

There are numerous Guest Houses, which I’d say are the best for the traveller who doesn’t want to spend it all on accommodation. I find Legasea - Guest House to be one of the cutest in town while still being extremely central. If, on the other hand, you do want your name to be Bond, James Bond, spare no expenses at Hotel Palácio, or Hotel Albatroz in Cascais where the views are no less than spectacular or if you are looking for the resort experience try Grande Real Vila Itália or Farol Hotel.

“But what is there to do in your ‘amazing’ hometown?”

There is no number one thing to do in Cascais, what you want to do is just be in it. Discover the centre of the old town, have a look at the marina and definitely walk the boardwalk until Estoril - this is the key feature of the area, a boardwalk along the beaches that connects Estoril to the old town of Cascais, that is where I spend my Summer evenings.

Sure you can go to the beach in this area, but let me tell you a secret, no one who lives here actually does. Where we go can only be reached by car, the area is called Guincho, it’s comprised of wider and longer beaches that are often sneered at for being too windy. It’s true, the whole area of Cascais is very windy and sometimes you might park the car, go down the cliffs while being showered by sand and wonder if this really was a good idea. Sometimes the only solution is going back up, but we will never set foot in Tamariz (Estoril’s beach) to bathe. Some people just have their kinks.

Other good beaches to try are the ones in Sintra, slightly north from Cascais, less touristy, with wider sand areas and considered some of the most beautiful in the country, like Praia da Ursa. Some honourable mentions are Praia da Adraga, Praia Das Maçãs and Praia do Magoito, but I won’t lie to you, the water is freezing.

Since I mentioned Sintra, I’ll make this a quick side note as I believe this to be an enchanted place hidden away in the mountains where fairies and elves live. It’s a great day trip from Cascais or Lisbon. You will need to visit the main village, try the traditional sweets Queijadas and Travesseiros at Piriquita or Casa do Preto respectively, the two best bakeries, and afterwards head over to Palácio da Pena, something built in a dream. There are hardly any words to describe it, as there is nothing like it.

And back to my love, Cascais. If you are into art, a definite must is Casa Das Histórias by Paula Rego, she’s a Portuguese world renowned artist. Nominated Dame Commander of the Order of the British Empire for her contribution to the Arts, as she lived in the UK for most of her life. More than the art inside this is an architectural piece worth exploring. Speaking of beauty in building form, Casa de Santa Maria and Museu Condes de Castro Guimarães are equally worth your gaze.

“Ok, sounds cool, but how about the important stuff?”

Ok, so you’ve read me babbling about what to do, but let’s cut the chase to what really matters: food. The city was built in and around the ocean, as such, it celebrates what the sea gives us. Here you are able to taste some of the best seafood in the country. I grew up with shrimp, thousands of kinds of crabs, being able to distinguish fish by their wobbly eyes, I say I am a part-time vegetarian as I can never say no to these delicacies when at home.

The best places for seafood are around the Guincho area, my personal favourite is Furnas do Guincho, but others like Monte Mar and Mar do Inferno are great too, especially this last one which is located next to a cave called Boca do Inferno, aka ‘mouth of hell’, because of the sound the waves make inside the hole of the cave. What you should order is Casca de Sapateira, Gambas ao Alhinho and a suggested grilled fish by the waiter, wherever you go, no questions asked.

Weirdly enough, something that is excellent here is sushi, given the quality of our fish and of our sushi men who mostly come from Brazil, where there is a huge Japanese community. The best are Confraria do Sushi, Sushi del Mar and the sushi restaurant at Farol Hotel. Portuguese sushi is a weird phenomenon, as it mixes the fusion sushi from Brazil and Portuguese fish like sardines. I think it’s the most fun and delicious, but I might be biased.

Still, if fish is not your thing, Hífen is the best tapas place in town, it gives a modern twist to traditional Portuguese ‘petiscos’ in the most delicious way possible. Estoril Mandarin is the resident Chinese place, awarded one of the best and most authentic restaurants outside of China. And if you’d like to get to know one of Portugal’s most famous chefs head over to Cantinho do Avilez and lavish in modern cuisine.

For breakfast there is only one place to go, Pastelaria Garrett, people flock here from all over Lisbon, but only locals get to have breakfast here every day (except Tuesdays because it’s closed). On Christmas, lines are the length of the whole street to buy their famous Christmas King Cake, which they also serve all year round.

“Well, it does sound nice…”

The designer, Phillipe Strack, recently moved to Cascais and on an interview to a local magazine, he named it the best place to live in the world, after turning down houses in Venice, Cap Ferrat and Formentera. I won’t tell you it’s the best place to live, mainly because I want to keep it all for myself, let’s not spread the secret further, but you can come to visit for a few days… just make sure not to get hooked.