The good, the bad and the ugly: what not to do in Lisbon. 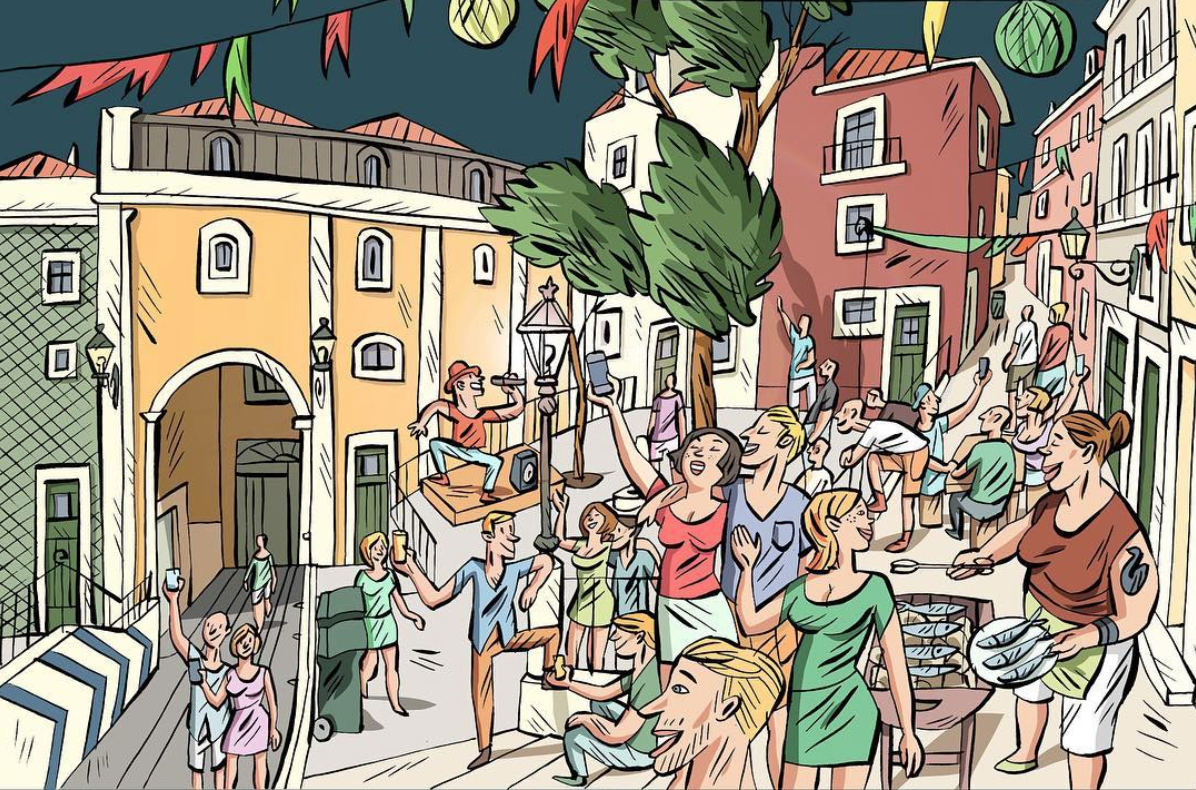 More often than not, we are told what to do, where to eat, where to sleep, which museum to visit, but hardly ever are we told what to avoid. Tourist traps are the worst; you feel foolish for falling into them but how could you have known? This is why I have compiled a list of what not to do in Lisbon. Having 20 years of experience in the city made me capable of rising to the challenge. I hate to be mistaken for a tourist, don’t I look Portuguese enough? Well, the tuk-tuk guys surely don’t think so.
‍

Do not stand in line for the Pastéis de Belém

The bad and the ugly: If you have decided to go to Lisbon and googled anything on where to go, chances are you have come across the famous factory and café of the Pastéis de Belém. At first they might seem like any other Portuguese custard tart, but they’re not. No one can quite put their finger on it, but they are different. Are they better? Yes, if you ask 90% of the Lisbon population we tend to ignore that 10% of nay-sayers anyway (how could they call themselves ‘alfacinhas’ - people from Lisbon, just fyi). It is said they have a secret recipe, only known by 5 people inside the factory, a number of myths have been generated on what the secret ingredient is, but an answer is yet to be found. So, you must definitely try them, but there’s a problem… the queue can go on for hours…

The good: But do not fear, what a lot of people forget is that the factory is also a café, you can just go in and ask for a table. The café is huge, a maze of adjacent rooms with no end. Ask for a table, there won’t be a line of more than three people, sit down, ask for a Pastel de Nata and an espresso, enjoy and then ask for another one, because you will definitely want a second round and a box to take home! Also, if you still find it too full, it is said the café next door to the left of the factory sells the exact same ones… but don’t shoot the messenger, it might be just an urban myth.

Do not under any circumstance eat in Rua Augusta

The bad and the ugly: After walking around Baixa and Terreiro do Paço you will probably find yourself hungry, but for your own good don’t eat on the main street Rua Augusta. Any place that tries to make paella pass as a Portuguese dish certainly doesn’t know what it is doing. On this street you will see pictures of every dish you can think of in laminated menus on waiters hands trying to lure you in to their restaurants, be strong, don’t cave, keep walking. On that note, don’t ever eat at a place that has pictures of their plates, unless you go for Chinese, it is not a good sign.

The good: If you do want to eat around Baixa and want to try something traditional try João do Grão, tucked in one of the smaller pedestrian streets. Sick of bacalhau already? Try Cotidiano, a fuss free lunch and brunch spot. Or maybe a more upscale place without the price tag? Go to Bastardo, (yes it does mean bastard) on the first floor of Internacional Design Hotel, to try contemporary cuisine with a sense of humour.

Do not pay more than 1€ for an espresso

The bad and the ugly: The Portuguese are known for being big coffee drinkers, a latte in the morning, the mid-morning espresso, the espresso after lunch, the potential afternoon ‘bica’ and the after-dinner coffee just to get the kick out of it - I am not kidding, there are people who actually follow this routine. This quantity of caffeine cannot amount to a cheap habit, unless you live in Portugal where an espresso can cost as low as 50 cents of an euro. If at a hotel or a hip café or restaurant someone asks you for more than 1€ for an espresso, kindly refuse it. I once laughed when I saw an espresso was 3€ at a hotel bar.

The good: Walk across the street to a traditional café and ask for a ‘bica’ (it just means espresso in Lisbon speak), I can guarantee you it will be less than 1€ and it will be the same if not better than the expensive one. In Lisbon you are usually served either coffee from Sical or Delta, the two national brands, which sell the same lots everywhere. The only place I will let you indulge on an espresso for 1,20€ is at Bettina & Niccolò Corallo, a chocolate and coffee shop that with coffee offers you a piece of chocolate of your choice from their selection - that is indeed worth it. Also, don’t forget to try the brownies and the chocolate sorbet since you are there.

Do not go inside the Tower of Belém, see it from the outside

The bad and the ugly: One of the most famous monuments to visit is the Tower of Belém, which is on UNESCO's World Heritage list. It was used as a defense fort for the coastline of Lisbon and built in a traditional Portuguese late gothic style entitled ‘Manuelino’. Its facade is a feast to the eyes, as well as its surroundings, but that is it. Long lines of ticket owners form outside the tower for a chance to get in for some unknown reason to me, as there is nothing inside.

The good: Sure the architecture is beautiful, but mostly from the outside. Sure the view is amazing, but is there such a different view from a few meters to the right, outside the tower? I would say your money and time are better spent elsewhere. Mosteiro dos Jerónimos is another famous monument, of great artistic endeavour that you should definitely visit inside, if you can face the queue. If you are not up for queues and you are into decorative arts try the National Museum of the Portuguese Tile or maybe if you are an art geek, like me, go to CCB, the Cultural Centre of Belém, where you will find the Museu Coleção Berardo with an incredible collection of contemporary art and if you’re lucky a great temporary exhibition. All of these sights are walking distance in the area of Belém. Also, don’t forget the Pastéis de Belém.

Do not eat Sardines outside the Summer months

The bad and the ugly: One of the many traditional fish dishes in Portugal is grilled Sardines. You might want to try this delicacy that is so characteristically Portuguese and hard to find anywhere else in the world. Sardines have a particular stronger taste than most fish and have a lot of bones but if you are not in for a whole grilled one, there are chefs that prepare them a multitude of ways. But there is a tiny ‘if’, for environmental reasons, Sardines are only allowed to be fished on the Summer months, every year the studied timeframe is released, it usually falls between June and September, anytime other than that you are most likely eating fish that has been frozen for months.

The good: I won’t say frozen fish is bad, depending on how it is prepared it can be delicious, I have tried Sardine croquettes and Sardine pasta from most probably frozen or canned sardines that were insane. These are great ways to have a first taste of them, but if you are ready for the whole thing, come to Lisbon during the Summer months. On the 13th of June Lisbon celebrates the day of its patron Saint, Santo António, on the eve the streets fill up with people, music and food, it becomes almost a festival of grilled sardines. Chuck one on a piece of bread and dance your way around the streets with a glass of sangria.
‍

Do not buy traditional tiles

The bad and the ugly: You might be attracted to buying a traditional Portuguese tile as a souvenir. These white and blue squares adorn walls all over the city, embedding streets, squares and buildings with history. You might see them being sold at antiquaries, ceramic shops or even street markets and be tempted to take one home with you - please don’t. Beautiful historical buildings are being vandalized all over Lisbon, tiles being ripped from the walls to be sold as mosaics and panels for tourists. All tiles are hand painted and handcrafted, usually dating from other centuries which makes them very valuable.

The good: Portugal is a country of craft makers, it is known for quality ceramics, especially the ones from the famous artist Bordallo Pinheiro. His work has been celebrated by the homonymous brand created as his legacy from the molds he used to make his original pieces. The pieces are sold in various shops all around the country, costing way much less than they should for such extraordinary work. One of the best places to buy them is at A Vida Portuguesa, a store dedicated to living like a Portuguese, where you can find various other traditional crafts, delicacies and books and enjoy that ‘alfacinha’ life causing no harm to its home.

On the other hand, if you are interested on what do to, you can check out my ‘A day in Lisbon’ article on the local’s guide to find out some nice spots.