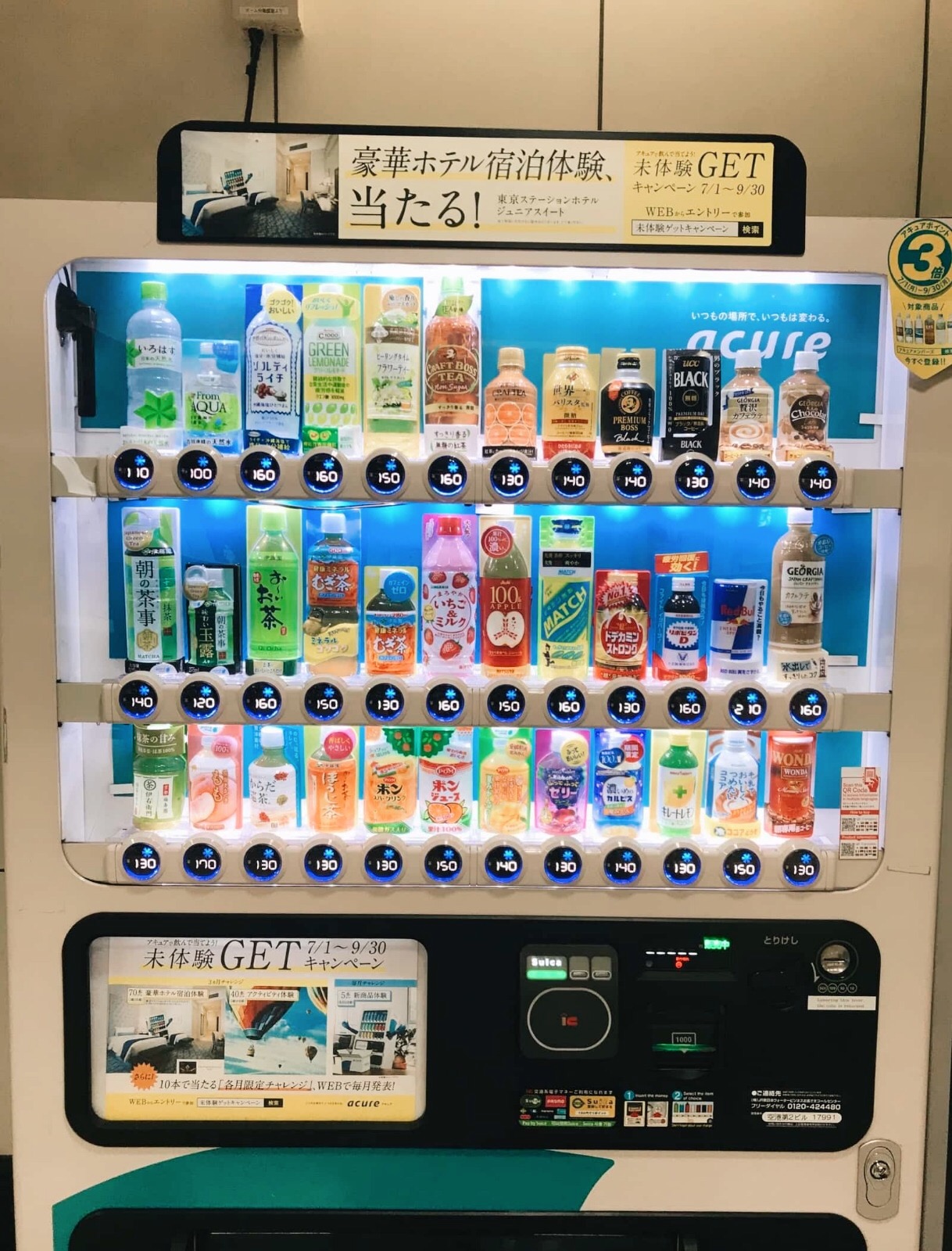 This was the first picture I took in Japan - a drink vending machine at the airport.

For me, this is the perfect representation of my trip to the other side of the world; The representation of the culture shock, of something quite common while at the same time so different. I had been to some countries in South East Asia, but never had I felt so out of place. The best explanation of the feeling I can give, is that I never felt 100% comfortable or at home because there was always something I didn’t really understand, and this goes far beyond the language. I’ve lived in Budapest for five months, not speaking a word of Hungarian, but there were places I could call home.

Japan was far beyond anything I had experienced until then.

Before you read further, I would like to stress that this is my personal experience, from a point of view of a southern European who is primed by Western ideals and stigmas and might often be naive in regards to Asian customs and lifestyle. I mean in no way to be offensive or be labelled as insensitive as I don’t understand something or might marvel at triviality. I am only human, experiencing the world.

I spent five minutes staring at this vending machine, trying to figure out what any of the drinks were. I had never seen most of them, barely knew how to use the machine either. I decided I was not that thirsty when I realised there was a silent queue of five Japanese people behind me. They did not look happy, but did not complain. I would’ve heard closed-mouthed insults had I been in Portugal, most probably. Or fully mouthed even.

I quickly ran back to my parents, pretending not to have disturbed the entire flow of the queue and workings of the train station at the airport - oh how the Japanese love queueing. My parents, who happened to be at a queue, as well, were hoping to get our train passes as soon as possible. We had bought 15-day train passes online, for which a confirmation arrived to our house via post a week later, so we could, at the airport, have our purchase acknowledged and passes issued. This was about a 5-step process, carried out manually, by 5 different people who passed our documentation on, hand by hand, doing inexplicable foldings, chopping, signatures and bindings at an astronomical pace.

Japan has a dichotomy of consistent tradition coupled with innovative technology. At a first glance it shouldn’t work, but they seem to go hand in hand for natives, whereas for us it can be a bit more of a brain teaser. There are so many papers to fill and procedures to go through before completing anything that it just seems so impractical. It is common for Japanese people to own two mobile phones; their personal one - a last generation smartphone able to do everything but business - and their professional phone - usually something similar to a flip phone or a Nokia 2110 (look it up). The use of the latter gives them a seriousness and professionalism in the eyes of their peers, as they allow no distractions. As for in our eyes, a side sneer is the norm.

One night, at the hotel in Tokyo, my dad and I went down to the concierge to ask for dinner recommendations. The food scene is big there - Japan holds the biggest number of Michelin-starred restaurants in the world and some of them, for exclusivity reasons, only allow reservations by fax. Not a joke -  FAX. As a gen-z/ late millennial, I have never laid eyes on a fax machine, nor do I truly know how it works. I’d rather you gave me a rotary dial phone to call the restaurant.

On the other hand, during the three weeks we spent there, never had my trips to the loo been such a delightful adventure. From toilets that greet you with lights and a slight flush when you open the door, to buttons that only emit a flushing sound for - let’s say - personal heavy duties releases in public spaces. Warmed up seats in hotels for bowel and buttocks relaxation and calming music for when lunch was carb-heavy. They probably did even more, but my lack of Japanese only allowed me to understand the front and back water jets and little else. Sometimes I took longer to find the flush than to actually do my business, often they would play a joke on us and have a regular wall flush button on the side of the toilet, that you would only find after squinting at all of the icons on the toilet’s remote.

As the days passed, in this land of no English, we were getting proficient at sign language and train catching, not caring to ask any longer what were we eating and my love for Matcha was growing ever stronger. Either the temperature was lowering or we were getting used to it, it was August, most days it was almost 100% of humidity and around 30º. At least when I thought of Japan before, the extreme weather was not something that popped into my mind, I wasn’t mentally prepared for this. My make-up felt like it was dripping off my face, and anything more than 20 minutes outside had been an adventurous journey. My dad started adopting the Japanese method of carrying a towel on his shoulders to combat the sweat, and when he said it was his new way of life, I frowned.

The Japanese method: a whole lot could be said about this. In Japan pin cards are not as customary as in Europe, some other methods are used and often they take the cards inside to make the payment and come back with the receipt, which to any Southern European people would be a red-flag-sign-for-alarm-I’m-getting-my-card-cloned type of situation. Once, at a very nice restaurant, one of our best meals yet, while barefoot and sat on low chairs in the old city of Kyoto, after my dad’s card was taken inside, the waitress came back saying it needed a pin. My dad was about to get up to go the register when she said it was not necessary and asked my dad for the pin, so it would be more comfortable for him. Our eyes were widely open in a mix of alarm and confusion. (My dad obviously got up and went there, we’re latin for goodness sake.)

This is just and example to illustrate the naiveness and kindness of people. Trying to accommodate their guests in the best possible way, going the extra mile to answer our needs. I am sure it never crossed that waitress’ mind that question could be ill-interpreted. I believe Japanese people are children at heart. They show the utmost respect for everyone, expecting only goodness from people. Believing in society is what we often lack on this side of the world. The biggest banalities make them laugh and they see the joy in games, cartoon characters, illustrations and magical stories. Ice creams are the shape of piggies, lattes can have elephants on them and dressing up as your favourite cartoon character is but a daily activity.

I believe the word ‘duality’ is what describes Japan best. Whether it’s tradition and innovation, seriousness and naiveness or the extreme temperatures year-round. The balance is achieved on this island off the pacific, where nothing for us makes much sense while at the same could not be any other way.