We Tried Dining in the Dark, Here's What Happened 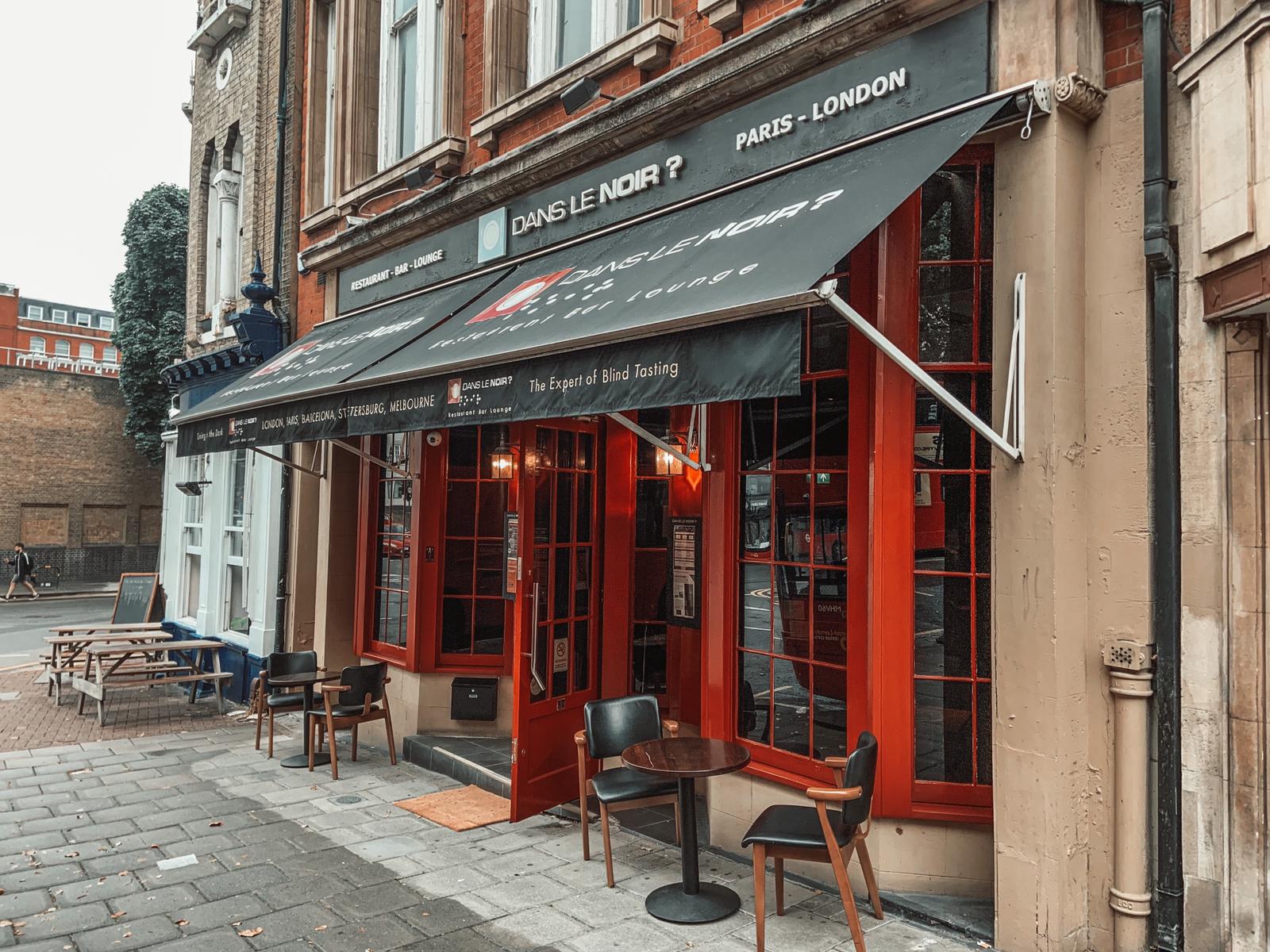 Hey, Strangers! We’re excited to introduce to you our new series, where we find and try London’s weirdest and most unique experiences. We get weird so you don’t have to! Last week we took a trip to Dans Le Noir?, a sensory experience where diners eat in the dark (and inevitably get food all over themselves).

Mariana: So, how should we tell them how this happened?

Gavi: Well before we get into it, we have to warn you we have been sworn to secrecy when it comes to the details of the menu, as we don’t want to spoil the surprise for anyone who wants to go and experience it for themselves.

Mariana: What we can say, on the other hand, is that we cried laughing, felt like five year olds eating and had never experienced food like this before. When you first get to the restaurant, you are asked to put all of your belongings in a locker as anything that gives out light is strictly forbidden inside, so no phones for at least two hours. It’s a good digital detox.

Gavi: I think without the distraction of your phone or the urge to post on social media, the experience was so much more enjoyable and special. After facing the emotional trauma of parting with our phones, we were led into a dimly lit hallway to meet our waiter and guide for the night, Fabio.

Mariana: Almost immediately he assumed I was on a date, as after I introduced myself, he turned away from me and asked “and you sir?” *laughs*

Gavi: I was almost offended until I remembered all servers at Dans Le Noir are blind or visually impaired ... It provided a great ice breaker before embarking on our journey into the darkness.

Mariana: He handed me the other end of a walking stick and told my ‘date’ *winks* to put her hands on my shoulders so we could enter his territory. We were guided through a tunnel and immediately enveloped in a sea of black velvet curtains that kept appearing from nowhere, until it was pitch black. And I mean Vantablack, your eyes do not adjust, at the end of the dinner I realised I did not know if I had spent most of the time with my eyes open or closed. It did not matter.

Gavi: As the light faded behind us and we were swallowed by darkness, I felt the transition from our territory into Fabio’s. The comfort we held in our ability to see faded with the dim glow of the hallway light behind us. The magic of the moment was ruined almost immediately as I bumped into a chair in front of me and the resounding “ow” that followed.

Mariana: It defies your ability to experience the world, you have to relearn your actions and think about what you usually do unconsciously, as your hand is put on a chair and you have to find out to what side it’s turned so you don’t sit in the vacuum. The initial shock is the worst, when the food comes it’s better… or weirder… I haven’t decided yet…

Gavi: One of the most intriguing parts of the experience is that aside from your general choice of veggie, meat or fish, you aren’t told what you’re eating until the very end, when you leave the dark room and it’s revealed to you. I found myself feeling up what was on my plate with my fingertips before even attempting to eat it. Playing the guessing game with each bite is really half the fun.

Mariana: I think we were pretty good at the guessing game, it just shows how much we are into food. We even tried tasting each other’s dishes but after I gave Gavi an empty fork that I swore had a bit of everything and later grabbed her fork on the wrong side and licked food off my hand, we gave up. However the most challenging part was figuring out if you still had food on your plate.

Gavi: Laughter filled the room as other groups of people shared our struggles, it provided a comforting sense of community and a welcomed reminder that we weren’t alone in feeling confused and out of our element.

Mariana: Thank god it was a woman at the other table that broke something and not us *laughs*. Also, I credit this adventure on detaching your eyes and consequently the visual part of your brain from the experience of eating. I care a lot about what I eat (sometimes too much), usually minding portions or some food groups I should not indulge in, however this night felt liberating, as this was not an issue. I ate in a different way, without any concern.

Gavi: We ended our meal with a lovely chat with Fabio, as he explained to us the challenges of ‘dining in the dark’ post-lockdown. Instead of two long communal tables that were traditionally used, the layout was changed to accommodate social distancing and half the number of usual diners. This provided an unusual challenge for himself and the other servers as he explained they had to completely relearn the landscape of the dining room before reopening a few weeks ago.

Mariana: It is interesting speaking to someone when you cannot see their face, your hearing is enhanced and you can understand when someone is directly speaking to you. Even talking to someone you already know is a different experience. After talking for a little longer in the dark and finishing our wine, we discussed leaving and calling Fabio in a low voice. No sooner than we said his name, he popped up from behind us and said “you called me, ladies?”. I think my heart skipped a beat.

Gavi: Outside we were met by Maggie, who after ushering in the second group of diners, sat down with us for a moment to talk about the concept behind Dans Le Noir.

The concept already existed, but the owner, Edward, wanted to go the extra mile and create a more unique experience, Maggie explained. The aim was to make it more global and inclusive. Creating equal opportunities for visually impaired people was one of the main concerns.

Maggie said the purpose of the restaurant is for people to understand what it feels like to be in the position of someone who doesn’t live life through sight. “I think it's a real eye opener. To say: ‘oh my god, these people have to experience it 24/7 and we only had to experience it for two hours.’  That’s what we want people to get out of it, and to have people coming out and saying: ‘You know what, I’ve mistreated that person, I’ll never look at them in the same way.’”

More so, it is an experience of the senses, you get to enjoy food in a new way. “I tend to eat with my eyes. But in the dark I’ve realised I like more foods than I thought”, Maggie smiled recounting her own experience.

One of the things that made our time at Dans Le Noir so lovely was the fantastic staff in both the light and the darkness. Maggie explained the unique hiring process that goes into creating this special team. There are two routes, for the guides and for front of house staff. For the visually impaired waiters there is a required two to three weeks training for them to familiarise with the space, so they can really call it their own. For the sighted front of house staff communication is key. They are constantly speaking with the guides through walkie talkies, so we can have a seamless flow of the whole experience.

When it comes to the food, quality is imperative (we can attest to this, as we literally cleaned our plate with our fingers after every course). The menu at Dans Le Noir changes every three months to highlight seasonal flavours. As the emphasis is on the flavour profile rather than the visual elements, the chefs carefully curate dishes with unique, yet vaguely recognizable flavours and textures to give diners a true journey of the senses.

To conclude our journey, we got Covid-curious and asked Maggie about the challenges of post-lockdown dining in the dark. “The only difference I find is it's not as busy as it used to be.”. The amount of customers inside was reduced from 70 to 35, hence the restaurant atmosphere is not as vibrant as it used to be. As communal tables were changed for individual dining spaces, the sense of community that was previously so integral to the experience was lost. Still, you can befriend people at another table and afterwards put a face to the voice you’ve been hearing all night. “We have had some blind dates come in where people have met each other online, one of them went into the room first and then they came out and they saw each other for the first time.” (who needs reality TV?)

We left Dans Le Noir full of laughter and fond memories (and just full in general because did we mention the food was amazing?) We both agreed we would love to come back with more friends to enjoy it with, we really could not recommend this experience enough. Thanks for joining us on this journey, stay tuned to find out what strange adventures we take on next.