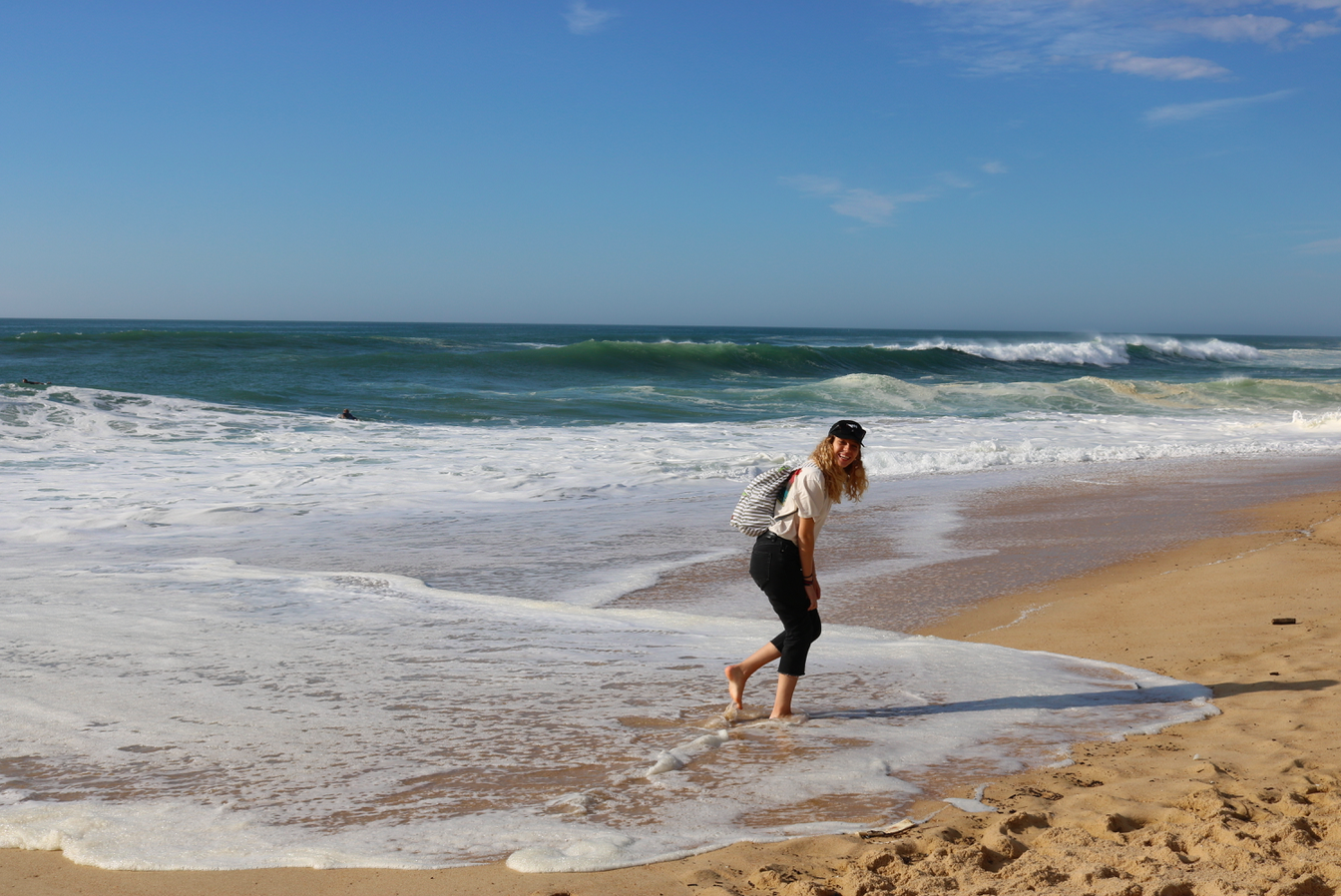 The internet is a sly, cheeky thing.

There’s scams hidden everywhere, targeting gullible people and luring them into re-posting, tagging, paying or oversharing. Some scams are obvious - like that anon-posted photograph of a poorly designed poster claiming you’ll win the latest iPhone 6 if you tag 3 friends. But then there’s the ones you can’t judge, the ones posted by an influencer whom you trust but sound too good to be true, because, let’s face it; who on earth gets an all-expenses paid trip just by re-sharing a post?

If I remember correctly, both my boyfriend at the time and I downloaded an app called Vero who had partnered with Boardmasters to offer one lucky winner the chance of an all-inclusive holiday to the annual WSL (world surf league) competition in the southern coast of France. Flights included. 4 star hotel. Open bar. VIP tickets to the World Surf League.

This was a huge deal.

Truth be told, had it been a scam, we would have fallen for it - after all, we were prompt at giving our passports and names to a dude whom we only ever interacted with via email correspondence. We never got asked for any bank details, but then again that would have been an obvious red-flag, even for our naïve selves. Either way, we remained skeptical up until we got mailed our boarding passes and itinerary.

From then onwards, we really could not believe our luck. From Glasgow we flew to Paris, to then board yet again to Biarritz, where a driver was waiting for us holding up a paper sign with our names. As we walked to his car he kept talking about this very high-profile surfer whom he’d driven the other day, and about how the town came to life during the surf league season. He was to then drive us to Cap Breton, more or less an hour away from Biarritz, and where the competition was being held. I remember the ride being very thrilling, as this man seemed to be having a heated argument with his significant other via text, all the whilst speeding and driving us two in the middle of the pitch-black night.

We got to the hotel at around midnight, a very nice beachfront stay which served the most wonderful breakfast (more on that later), but that served no food past 10pm and had no vending machines whatsoever. We were starving, so this was a bit of an issue. In a rather tired attempt at celebrating our arrival, we got ourselves a glass of wine and begged the waiter for crisps, nuts, or anything of the sort he might have behind the bar, and ended up with a massive tray of green olives as a result.

It was only when we woke up the next morning that we realised we had no idea what to do next. We had a number we were supposed to call once we arrived at the competition area, where we were supposed to meet someone who would then give us our VIP bracelets for the remainder of our stay. There was only one, tiny, minor issue...

We had no idea where the competition was being held.

I’ll spare you the details, but we ended up discovering that the competition was being held quite far away from where we were staying, in a nearby town called Hossegor. Walking was most certainly not an option. After seriously considering our possibilities, we opted for a bike, which turned out to be the wisest and most convenient mode of transport during the rest of our trip.

A thirty minute journey later and we’re at Culs Nus, surrounded by people in surfer hoodies and surf boards under their arms. The crowd was variant, from families huddled together in the beach, to a swarm of photographers with their big cameras propped by the shore eager to capture the next Wavelength front cover. I think that’s when it really hit me. We were at the Quicksilver Pro, part of the worldwide surf championship tours where the big names compete. And we had VIP tickets for all of this.

We had no idea what our VIP tickets actually entailed though. Turns out, not only were we granted access to the tents, with prime views, massive tv screens, free bar and lunch, but we also received a welcome-pack including a Quicksilver goodie, a towel and a bag. Oh, and a tour around the dressing rooms, where if we got lucky we would bump into the likes of Gabriel Medina, Felipe Toledo or Macy Callaghan.

Perhaps now’s the time to tell you that although I love surfing, I have no idea how surf competitions work. Never did I imagine that you’d be able to so freely run after your favourite surfer as soon as he’s finished his “heat” (aka his round), and like, actually touch them. Neither did I realise that doing this was actually quite inconsiderate, since these guys are just out of the water and exhausted from trying their best. This, in retrospect, is probably why there weren't many people running after them. Whoops.

I got to meet a fair share of surf celebrities during our stay, and found it quite heart-warming that we’d end up having dinner in town, next to a table full of the surfers whom we’d spent the whole day watching. Of course, the really big names who would’ve attracted swarms of paparazzi stayed in their luxury villas, but a high number of well-known surfers frequented Tante Jeanne, the hip-local restaurant. It was there that I, dirty from having spent the whole day at the beach, gathered enough courage to interrupt Sage Erickson and Macy Callaghan’s dinner to state, quite lamely:

To which we proceed in taking about 6 or 7, because the lighting wasn’t good enough. I actually later realised that the girl who took our picture was a well-known photographer, and I totally gushed over that too, as you do.

As for my remaining “celebrity” interactions, you’d be proud to know they were a lot less embarrassing. I even got Gabriel Medina (2 times world champion) to wish me a very pleasant evening, which remains a big highlight of my trip.

But it wasn’t all surfing and fangirling.

The Quicksilver Pro offered a series of events and pop-up activities during the week, including a stand by the Keep a Breast Foundation carrying out activities led by the artist Laure Marnas, who creates beautiful art pieces available for purchase on her website.  It was by meeting her that we found out about an art exhibit happening in an abandoned building somewhere in town, and so off we set.

We rode a bike through the residential streets of Hossegor for what felt like forever until we reached a house - clearly abandoned - where a DJ set was blasting techno and overpriced food trucks were parked outside. If the entirety of Culs Nus was brimming with tourists because of the competition, here the only english speakers were us.

Amidst techno beats and beer, we made our way through the different rooms, exhibiting all sorts of modern artists. I’d try to describe the artwork in a bit more detail, but the thing is I completely blanked out most memories of the place the moment I discovered that my all-time favorite artist, @the_minimalist_wave, was showcasing some of his work. In all honesty: What were the chances of bumping into someone you’ve admired from afar for years in an abandoned house in the middle of France?

I don’t know if I believe in Karma, but I like to think things in life follow a balance, and we undoubtedly were skewing the scales with our good luck. That being said, If you’re dying with envy, then you’ll be very glad to know: we missed our flight back. We arrived at the gate too late, although the flight hadn’t yet left and a few passengers were still to board. What was supposed to be a free trip ended up costing us a big chunk of our savings, and may have ended on a few tears on my end as I begged the cabin crew to let us board.

Despite the disaster, this would have been relatively okay if it weren't for the fact that we had to make it back to Glasgow the next day, and so after laborious hours on the phone to the airline, we managed to book ourselves a flight to Paris and an early morning one back to Glasgow. Since we lived (and still do) on a student budget, the idea was to sleep in the airport, but that plan went down the drain when we realised the airport closed at midnight. The rest consisted of us trying to cross a motorway in the middle of the night without luggage in order to reach the nearest budget hotel.

And then the next, which was also full.

Under the effects of exhaustion and hunger, we gave in, paying an extortionate fee at the 4 star hotel for a couple hours of sleep and some small shampoo samples which I stuffed in my bag.

Although it sounds like our trip ended up in disaster (and it kind of did), I think it probably ranks on my top adventures so far. It was simply so random and different from anything I had ever experienced before. If you get the chance to visit Hossegor during the Quicksilver Pro, I would thoroughly recommend you do. If you’re going to take anything from reading this article, let it be the following: Always check your boarding passes and re-post that instagram competition you think is fake… otherwise you’ll really never know.