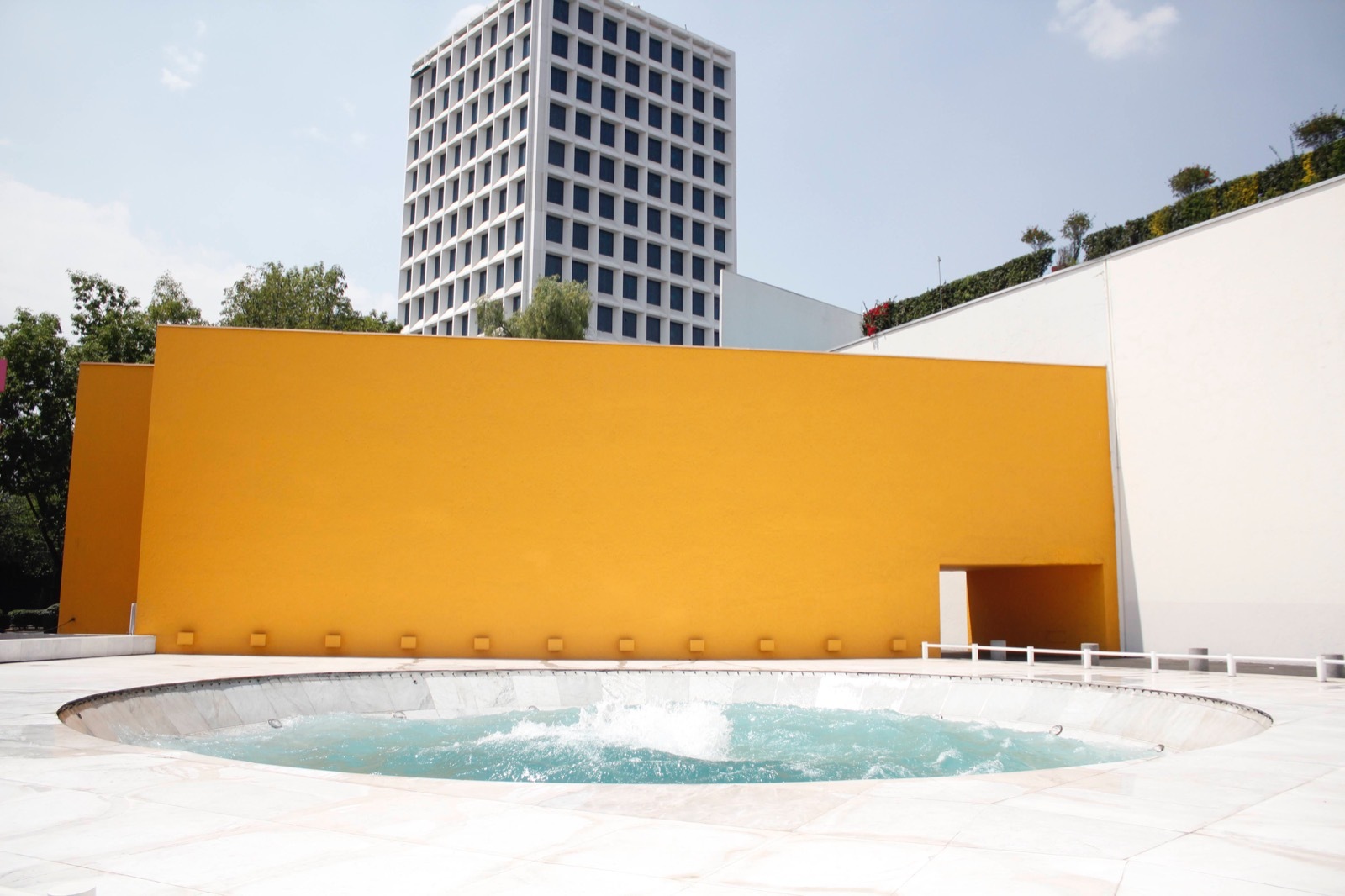 There obviously is no better way of getting to know a city than through the locals, this has become common knowledge for anyone that dignifies themselves as a traveler. As such, we thought the only way we could introduce a section on Mexico City would be to ask locals what does it really feel like. No tourist traps, no embellishments, just pure feeling (and good restaurant recommendations, of course). Out of these beautiful conversations emerged two articles, this first one is about feeling, about passion, what does it feel like to actually be in the city. The second one is about all you need to know, from A to Z, where to go, what to eat and how to begin.

For this task, we called to the podium Carolina, 25, from Tabasco - spicier if mixed with habanero, a fashion student now living in London. Liz, 27, from Mexico City, after a stay in London, back to her roots. Natalia, 27, a Master student from Mexico City now in Barcelona. Marielena, 27, an entrepreneur from Mexico City currently living between home and Cuernavaca, Morelos, Mexico. And Kevin, 27, an Industrial Designer who left Mexico to live in the Big Apple.

As a crash course, the dreaded three-word description. On Mexico, there seemed to be quite an agreement on how colourful and diverse it is while still having a great sense of tradition and humane energy confining in its people. It is interesting to see how strangers who happen to share a home have the same perception of it. However, their description of Mexico City seemed to fluctuate with the exception of one thing, it is overwhelmingly busy.

Q: What does it mean to be Mexican for you?

A general feeling of pride was what I got with this question. It’s beautiful to acknowledge one’s luck for having been born where fate has dropped us, to marvel at randomness and be grateful for it.

‍“It’s a privilege. It means we are part of a great legacy, I feel pretty honoured to be Mexican. Seems like we were created with avocados, tortillas, spicy chili, chocolate, corn and noble hearts. We are amazing. Franz Kafka once said that Mexico was the country of the surrealism. Once you come to Mexico you never want to leave. I am in love with [the] people, nature, culture, food, music. I could not be prouder to be part of this country.” - Marielena.

‍Food is never something to overlook in Mexican heritage, they pride themselves in being connoisseurs of great food and having the pleasure of sharing it with everyone. “We are very happy and funny people. We love to enjoy the moments. I would say [we are] a bit too relaxed sometimes (lazy)”, Liz says while giggling, “but we know how to enjoy the small moments, so much that we can be chaotic and loud from time to time”.

‍Q: Are there any prejudices towards Mexico or Mexicans that should be dismissed?

Example: Is Mexican food as spicy as advertised?

‍“Well, I don’t like spicy food”, Carolina burst out laughing. “Yes we do have very spicy food, but not all of it. Although, be aware if a Mexican tells you it’s not spicy, double-check, because most of us are used to it, so we don’t feel it anymore when it’s mild. We’re not lying, it’s just different perspectives”, she says smiling. “Yes it is spicy, but that makes it better! Actually what should be dismissed is a general sense of corruption in everyone”, agrees Natalia while still making a very strong point.

“When you travel around the world it seems like nobody knows about Mexico or Mexicans.

They usually ask us what it feels like to live with “narcos”, if we own a donkey instead of a car or if we spend the day with a “sombrero” under a cactus.” although said by Marielena, this seemed to be a common feeling between everyone. While it is quite humorous, it is shameful to understand how some people can be so uninformed and narrow-minded.

She even cared to make a small list for us:
“1. Mexico is dangerous (a little bit, but nothing to worry about).
2. Food is spicy (not all of it).
3. All Mexicans are small and brunettes ( hahaha we even have blonde people).
4. We are rapists, criminals, narcos and bad people (noooooooo).
5. 5 de Mayo our Independence Day (hahahaha it’s not).
6. Nachos and margaritas are our national food and drink speciality (NEVER).”

“Despite news warning how dangerous it is and unsafe (which to some extent is true), when you arrive to Mexico you will find that Mexican people are very welcoming, friendly and will do whatever is in their hands to make any foreigner feel at home. We will open the doors of our house, our family, our friends” passionately adds Liz “Finally, not all Mexicans know how to dance salsa or other latin music, but we all do like to party. Partying like a Mexican should be a thing!” It most definitely should be a thing!

‍
‍Q: Would you say the country is very conservative or is it open to new comers and tourists? How would you describe the Mexican people?

Although being a secular country, a big part of the population is Catholic, which might make them quite conservative. What I wanted to understand with this question was how open would they be to people who don’t live by the same norms as them, either religiously, culturally or sexually, but Natalia was quick to pull the rug from under my feet “Mexico is a huge country. Just in Mexico City we are more than 22 million people. Of course that there is every kind of person. But every time it is more liberal and of course, open to tourism. Mexican people in general are massively kind, warm, and gentle to everyone. We make fun of everything and we are happy.”

“If you have not been in Mexico, you don’t know what love is. I have been in many countries around the world, every time I travel, I promise myself to never compare my country but it’s impossible. Mexicans are kind, serviceable, funny, friendly, lovely, you want them to be part of your family. So, welcome to our beautiful country, feel at home”, Marielena is a true poet.

On another end, Kevin, Carolina and Liz acknowledge religion, especially in more remote areas can be an incentive towards conservatism. Nevertheless, all three incessantly mentioned how welcoming and friendly people are, despite any political or religious beliefs.

Q: What are the social norms? On tipping, while walking on the street? Is there anything you hate that tourists do or don’t know about or social constructs they don’t follow?

“Tourists are really respectful of people when they go to Mexico, probably sometimes a bit confused by street vendors.” mentioned Kevin, to which Liz agreed and warned “the only thing I would warn people about is that Mexico is a very poor country and if you go to a touristic place there will be a lot of people trying to sell you loads of stuff and tours and all types of things. That sometimes can be overwhelming for tourists because those people are very loud and insisting... very intense. So I would ask a bit of comprehension because they are desperate to sell some stuff to tourists. I would recommend to be firm, keep calm and if you don’t want say a rough “NO Thank you, we don’t want anything”, but don’t be rude. Another thing, be smart about prices, usually to tourists they will try to charge more money... but also don’t be too stingy and don’t haggle the price more (if you already think that it is too cheap) they need that extra pound, dollar, peso more than you do - of course, if you are traveling with a small budget then do whatever feels safe. It’s a tricky situation!”

“If you are a tourist you have to be watchful, not afraid, just watchful”, said Marielena.

The general agreement was that there were no specific social norms and that they were usually quite comprehensive towards tourists. Despite not being compulsory, on tipping, the consensus was that 10% to 15% is always nice.

Q: Is there an unspoken ‘tourist tax’ as in you would be charged more if you are a tourist? Is there anything like this and are there ways to avoid it?

“Kind of, in taxis for example, although they won’t charge you more, they might take a longer route, just so they make more out of you”, frowned Carolina, “never trust tour guides without agencies, they will always charge you more” she also mentioned that in some beaches in Cancun Mexicans would pay less, if you want to avoid it, speak Spanish.
‍

The same advice came from Kevin, “It exists, and is more like people will take advantage of you because they think you make more money. Just be nice and ask for a discount. Also if you speak Spanish use it, people love if you even try a little”.

Q: If not living in Mexico City: What are the main differences and similarities between Mexico City and the place you live in right now?

“Way less people!!!!!!!! Less pollution as well”, screamed Natalia at the top of her lungs all the way from Barcelona.

Carolina had an endless list. “Here in London people follow the rules… like when crossing the street, I don’t get it”, she said laughing. “In Mexico we’re not yet very environmentally conscious, here there is hardly any single-use plastic, we have a long way to go. Also, the people, Mexicans are a lot more physical, British people don’t like physical contact and are a lot less friendly. Oh, the tube, in Mexico we don’t use it and the food is so much better there, here everything tastes the same.”

“Both New York and Mexico City are vibrant and full of life, growing businesses and a lot of activities”, described Kevin.

“Mexico City is huge and there are loads of people living there... meaning there are many different areas... some safe and cool and others that you have nothing to do there. In Mexico there is a lot happening. And you will notice when you drive. Mexico City is crazy to drive in... it seems like a car jungle.” was Liz’s take on coming back to Mexico.

It was wonderful to do these interviews and realize how much these people love their country and how much they miss it while away for so many different reasons. Having never been to Mexico myself, this left me with a great desire to go as soon as possible to be able to understand what was described to me. When starting this project I felt I was in an underprivileged position to tackle it, having not actually been to the country, but in hindsight it may have given me the upper hand. Since being a stranger to it, in conversation and when writing the questions although I might have been vulnerable and naive, it made me level to the aim target of this article: myself, people who haven’t yet been to Mexico or might be skeptical of it.